Posted by stunner3baby | On October 04, 2013 | Leave a comment | Under: A Little Dash, Columnists, Columns, Dash West

The red carpet at the BET Hip Hop Awards 2013 was turned up with “sway-a-blink” as our hip hop giants assembled for celebration. We can always count on The BET Hip Hop Awards to provide us with some wild fashion moments as Kevin Hart, 2 Chainz,Rick Ross, Yo Gotti, Future, Eva, Lil Scrappy, MC Lyte, Lola Monroe, Lil Mama, Stevie J, Joseline Hernandez and Snoop Dogg are just a few of the stars who stepped out in style for the eighth annual event, which aired on October 15.

While there were definitely a few winning looks, most of the attendees took the opportunity to be a bit more daring with their outfits. Eva provided a memorable LBD mini beaded outfit with thigh bling. Lil Scrappy’s new “boo-girl” Bambi Johnson wore a body hugging canary yellow form fitting vixen dress. Mike WiLL posed on the red carpet with Future — and the guys showed off graphic sweatshirts and classic shades. Lil Mama showed off some bright green hair! Her colorful new ‘do was a fun look for her — and it really played up her colorful suit. Nelly kept his look simple, dressing up his sweatshirt and bright yellow kicks with black leather shorts for a sporty style.

B.o.B. rocked an extra long tunic over bandana printed pants. His round-framed shades and combat boots gave the look some added edge. Kendrick Lamar kept his signature style for the red carpet, looking hot in a plaid button down shirt. He posed with Schoolboy Q and Jay Rock – and they all looked like they were having a blast on the red carpet. Rick Ross‘chest tattoos served as decoration underneath his unzipped velour track suit jacket. It’s a look only he could get away with.

MC Lyte said she was nervous following a video tribute that honored the veteran rapper for her career achievements at the eighth annual BET Hip-Hop Awards. Once MC Lyte gathered herself, she thanked a host of people who helped further her career. She urged the female rappers who have come after her to continue to shine and push the genre forward.

“Please keep the dream alive, I am with you,” said MC Lyte, who was given the “I Am Hip-Hop Award” at the taped award show at the Boisfeuillet Jones Atlanta Civic Center. Rapper Eve handed the award to MC Lyte, who became known in the rap game in the late `80s and `90s. She relied on wit rather than sexuality and rapped with a man’s bluster and braggadocio. She delivered hits such as “Cha Cha Cha,” “Lyte as a Rock,” “Poor Georgie” and “I Cram to Understand U.” 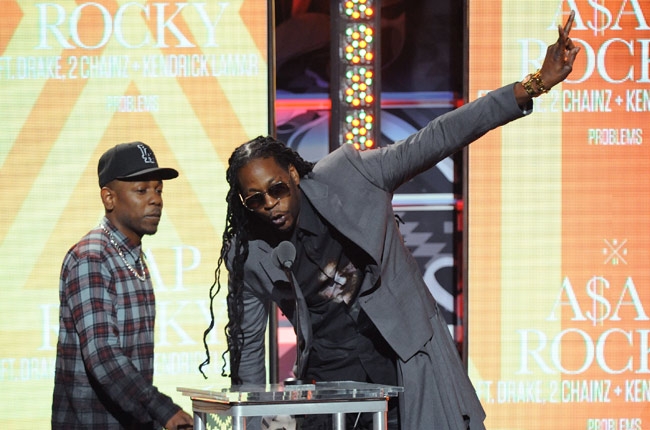 Actor Will Smith, his wife, Jada Pinkett-Smith, and rapper-actress Queen Latifah took part in the video that paid homage to Lyte.

“She set the precedent for female freestylers,” Eve said of MC Lyte. “I’m truly, truly honored. She has meant so much to me in my career.”

Drake won the People’s Champ award, but Kendrick Lamar captivated attendees with his recorded four-minute freestyle. It earned applause from the audience and others from Rick Ross to MC Lyte. But shortly afterward, French Montana and Diddy slightly jabbed the Los Angeles-based rapper – who recently called himself the “King of New York” on Big Sean’s “Control.” While Montana performed “Ain’t Worried About Nothing,” he put a crown on Diddy’s head as a symbol that the rap mogul is the king of his native New York. When the camera caught Lamar’s reaction, he smiled and applauded Montana and Diddy.

Snoop Dogg was his ultra-smooth self in the rapper’s first hosting gig, driving onto the stage in a blue 1964 Chevy Impala with hydraulics to start the show. He also used the platform to show off his YouTube network called GGN (Double G News), featuring interviews with rapper 2 Chainz and comedian Luenell. Kevin Hart provided some comedy, teasing Floyd Mayweather Jr. for wearing cowboy boots. The comedian and his “Real Husbands of Hollywood” cast members also did a spoof of the show’s popular freestyle Cypher session. Bone Thugs-n-Harmony performed “Thuggish Ruggish Bone,” “First of the Month” and “Crossroads.” Juvenile made a surprise appearance with 2 Chainz. Rick Ross took the stage with Future, performing “No Games.”