This is one of the most bizarre cases of a wealthy, professional athlete throwing his life riches and accomplishments down the drain due to a sinister plot of murder ever reported. Former New England Patriots tight end Aaron Hernandez was indicted for the murder of his friend, who was shot less than a mile from the NFL star’s North Attleboro, MA.., home.  Hernandez, 23, was charged by Bristol County District Attorney Sam Sutter with first-degree murder and a weapons violations in connection with the killing of 27-year-old Odin Lloyd, who was allegedly shot five times, execution-style on June 17. Hernandez appeared in court at 2 p.m., as his lawyers presented motions to the judge. He did not speak, but he mouthed the words “I love you” to his mother, who was also in court.  The family of Lloyd, a semi-pro football player, appeared in court wearing buttons emblazoned with his picture. Hernandez, who was friends with the victim, reportedly took issue with Lloyd talking to “people he had a problem with” at a Boston nightspot called Rumor shortly before the killing, according to prosecutors and court documents.

Hernandez was arrested on June 26 and has been held without bail in a solitary cell at the Bristol County House of Correction. The indictment came after prosecutors requested, and received, a 30-day extension to outline their case to Hernandez’s defense attorneys. The latest development in the ongoing investigation into Hernandez and other incidents the football standout is suspected of involvement in. Soon after the Lloyd killing, Boston detectives were investigating whether Hernandez had a role in an unsolved drive-by shooting that left two men dead more than a year ago. That investigation is ongoing, prosecutors said.

The Lloyd investigation also has led to charges against two men prosecutors said Hernandez was with the night Lloyd was killed: Carlos Ortiz, 27, and Ernest Wallace, 41. Ortiz has been cooperating with investigators, according to court documents, and has fingered Hernandez as the alleged trigger man. Wallace was also indicted on charges he tried to cover up the crime and protect Hernandez. He is expected to be arraigned at Fall River Superior Court. A woman has been charged in connection with another crime being investigated to determine whether Hernandez was involved. Shayanna Jenkins the girlfriend of former New England Patriots football player loyalty is in question by Bristol County prosecutors said, Jenkins lied before the grand jury, including disposing of a box from the basement of the couple’s North Attleboro home. 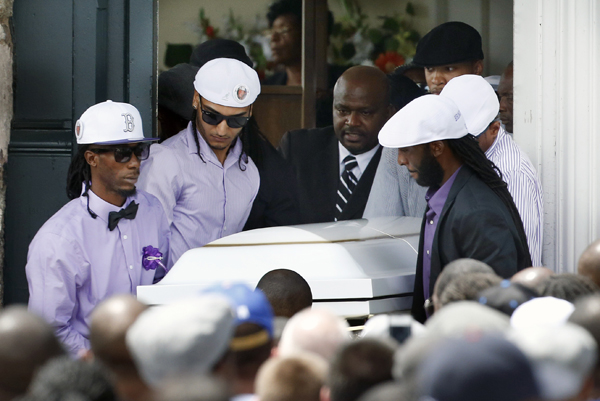 Tanya Singleton, Hernandez’s cousin, has been locked up held at Suffolk County Jail since Aug. 1 because of her refusal to cooperate with the grand jury probing a July 15, 2012 drive-by shooting in Boston’s South End that left two men dead and a third wounded, police and prison officials said. She was indicted on contempt charges, according to court documents is expected to be arraigned in the coming days. Hernandez is being probed for any link to that shooting.  Aaron Hernandez’s high profile might be the best thing for the authorities as they search for answers in a 2012 double murder in the south end of Boston.

A witness who asked to remain anonymous said he was in the backseat of the car when his two friends, Danny Abreu and Safiro Furtado, were shot and that he recognizes Hernandez’s face as the shooter from that night.

The witness to the shooting said he suddenly heard someone say, “What up, Negroes?” right before gunshots went off in their direction. “Things happened so fast. I was trying to defend myself,” the witness reported. “They were shooting everywhere inside the car, front to back. They just came to kill. That’s it.”

Hernandez has been considered a suspect in the incident ever since an SUV matching the description from the shooting was found at his uncle’s house in June. The SUV was reportedly rented out to Hernandez. Authorities also said in August that they found a gun that they believe was used in the 2012 double murder.

“When I see his face, I just recognize his face. Compare his face that night to his face now. It’s that face that I remember,” the witness recalled.

The former NFL star tight end remains in jail without the opportunity for bail as he awaits the next step following his murder and weapons charges in connection with the death of his friend, Odin Lloyd. He has pleaded not guilty and his attorneys have remained firm in their stance that their client will be cleared of charges due to what they believe is a lack of evidence.