Stunner Baby Magazine is all over the Major League Baseball steroid scandal that has knocked the doors off “America’s Favorite Past-time.” New York Yankees three baseman and three-time Most Valuable Player Alex Rodriguez was dealt a 162-game suspension after an arbitrator upheld most of the player’s punishment in response to a 2013 steroids scandal. Rodriguez will be sidelined for the upcoming season and won’t be eligible to return to the field until 2015. The suspension also includes all playoff games in 2014. The announcement of Rodriguez’s suspension from baseball was made On Saturday, January 11, 2014 by Major League Baseball’s chief arbitrator, Fredric Horowitz. The decision came as a result of an earlier investigation into the 38-year-old New York native’s use of illegally from a clinic in Miami that has since close its doors in shame. The clinic, called Biogenesis, was operated by Anthony Bosch, who was reported to have had a close relationship with Rodriguez. In early 2013, the Miami Times obtained detailed documents from a former Biogenesis employee that suggested that several major league baseball players tested positive for steroids, including testosterone. The ex-employee, annoyed over missing back-pay, revealed clinic records that were “clear in describing the firm’s real business; selling performance-enhancing drugs.”  Major League Baseball sued six people connected to Biogenesis, accusing them of damaging the sport by providing banned substances to its players. Biogenesis of America was a health clinic operating in Coral Gables, Florida, specializing in weight loss and hormone replacement therapy. Several employees quit in the fall of 2012 after they were not paid, and the clinic closed later in December 2012.

On July 22, 2013, MLB suspended Milwaukee Brewers player Ryan Braun for the reminder of the 2013 season (65 games and the postseason) for his involvement with the Biogenesis clinic. Braun, who lost $3.25 million as a result, did not appeal the suspension. ESPN reported that Braun decided to “strike a deal” with MLB after being presented with the evidence against him. Braun had previously tested positive for testosterone in December 2011, but maintained his innocence and ultimately avoided suspension for that violation on a technicality that his test sample had been handled improperly. On August 5, 2013, Alex Rodriguez was suspended through the 2014 season (211 games at the time of the decision), but was allowed to play in 2013 pending his appeal of MLB decision. Twelve other players connected to the Biogenesis scandal agreed to 50-game suspensions without the right to appeal: Antonio Bastardo, Everth Cabrera, Francisco Cervelii, Nelson Cruz, Fautino delos Santos, Sergio Escalona, Fernando Martinez, Jesus Montero, Jordan Norberto, Jhonny Peralta, Cesar Puello, and Jordany Valdespin. Cabrera, Cruz, and Peralta were All-stars in 2013. 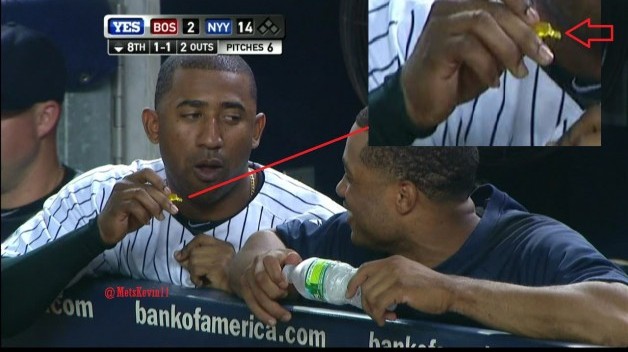 Rodriguez, who received the longest suspension of all the players linked to Biogenesis, was punished for “his use and possession of numerous forms of prohibited performance-enhancing substances, including testosterone and human growth hormone, over the course of multiple years” and “for attempts to cover up those violations and obstruct a league investigation”, according to MLB. In May 2013, Bosch agreed to work with MLB investigators in exchange for his name being removed from the lawsuit. Anthony Bosch, the founder of the former Florida clinic Biogenesis, said in an interview on CBS” “60 Minutes” (January 13, 2013) that he injected Rodriguez with performance-enhancing drugs. Bosch told CBS’ Scott Pelley that he personally injected Rodriguez with drugs because he was scared of needles.” “So at times,” Bosch said, “he would ask me to inject.” He said that Rodriguez used testosterone, insulin growth factor one, human growth hormone, and some different forms of peptides.” According to Bosch, Rodriguez paid about $12,000 a month for performance-enhancing drugs. He first met the MLB All-Star in 2010, shortly before he hit his 600th home run. He wanted to get to a bigger number, (800) home runs and wanted Bosch’s help.

The in-depth interview with Bosch detailed text message conversations between him and Rodriguez. It is the longest drug-related suspension in MLB history. MLB commissioner Bud Selig remarked “We conducted a thorough, aggressive investigation guided by facts so that we could justly enforce our rules … we pursued this matter because it was not only the right thing to do, but the only thing to do.”

FOR MORE ON THE ALEX RODRIGUEZ SCANDAL, VISIT: