» Columnists » Claude Julian » Letter From The Editor: Education at the White House

Letter From The Editor: Education at the White House

Posted by stunner3baby | On February 07, 2014 | Leave a comment | Under: Claude Julian, Columnists, Features, Letter From The Editor

Stunner Baby Magazine was honored to received a request from The White House (Office of the Press Secretary) to provide media coverage on expanding college opportunity. On Thursday, January 16, 2014, the President and First Lady hosted a gala event at the White House on expanding educational college opportunity for low-income students. This event included college and university presidents and leaders from nonprofits, foundations, state governments, and businesses across the country.

The President believes he has a job to do, and every day he is fighting to create more opportunities for working and middle class Americans. And while he will continue to work with Democrats and Republicans in Congress to move our country forward, the President is committed to partnering with colleges and universities, business leaders, nonprofits and others to do everything he can to support more college opportunities for students across the country.

The President and First Lady are joining with leaders in higher education to announce over 100 new commitments to expand college opportunity. To help more students afford and graduate from college with the skills they need, the Administration has already taken action including doubling Federal investments in Pell Grants and college tax credits and reforming student loans. As the Administration continues to push for changes that keep college affordable for all students and families, the President feels they can and must do more to get more low-income students prepared for college, enrolled in quality institutions, and graduating if we are to achieve our North Star goal of leading the world in the share of college graduates by 2020. Together, the President, the First Lady and these leaders in higher education are taking another step to help ensure that every child, rich or poor, has the opportunity for a quality college education so they can get ahead.

Over 80 colleges and universities are – in addition to their efforts in other categories – taking actions like engaging in new efforts to recruit students who might not otherwise attend their university, expanding need-based aid for low-income students, setting new goals for increasing the share of low-income students, committing to additional community college transfers and taking new steps to improve outcomes for low-income students once they arrive on campus.  Low-income students are less likely to prepare to apply for college by taking recommend courses, visiting college campuses, and taking the SAT or ACT.  Building on models that have had success in getting more students to prepare for college through early interventions, participants have committed to working with elementary, middle, and high schools to encourage college-going and assist with preparation. More than 30 colleges and 12 organizations have made commitments in this area.  First lady Michelle Obama is turning a film about two inner-city boys left to fend for themselves into a call for the nation to do more to help young people get the support they need to make it to and through college. The first lady held a White House screening of “The Inevitable Defeat of Mister & Pete” on Wednesday for educators and others working to help young people make it against long odds. The movie tells the story of two boys in New York left to take care of themselves, while dealing with all the crisis impact experiences of growing up in a low-income environment. 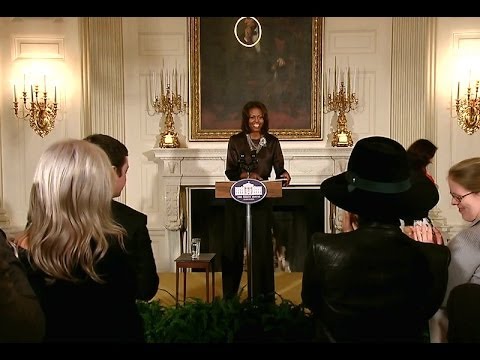 “The movie should begin the conversation that is already happening about what we have to do to invest in kids in this community,” the first lady said. “Because there are millions of Mister and Petes out there who are just struggling to make it.”

Alicia Keys, the movie’s executive producer, was on hand for the screening at the White House. An Associated Press interview with Keys after the event was abruptly halted by one of her assistants, and the reporter was ushered out of the vehicle where the interview occurred, as it left the White House grounds, because the handler said she objected to the type of questions the reporter was asking. The reporter had asked Keys whether she would attend Mrs. Obama’s birthday celebration later this week and about Mrs. Obama’s impact as she turns 50, in addition to questions about the film and about education.

The First Lady stated, she’s adding another initiative to her roster: helping achieve President Obama’s goal that the U.S. by 2020 will have the highest proportion of college graduates in the world. (It once was No. 1 but has fallen to 12th, she said.) She’s not giving up her “Let’s Move,” food and exercise program or her “Joining Forces” campaign to help military veterans and their families.

“Nothing is going away, we’re just adding more on,” Obama said, “I’m going to be doing my very best to promote these efforts by talking directly with young people. That’s my focus. Everybody else is going to be talking about resources, but the one thing I can bring to this is the message that we can give directly to young people.”

EDUCATION AT THE WHITE HOUSE GALLERY