Letter From The Editor: Martin vs Incognito Bullying

Posted by stunner3baby | On December 06, 2013 | Leave a comment | Under: Claude Julian, Columnists, Featured, Features, Letter From The Editor

This is one of the most bizarre hazing antics rocking both the Miami Dolphins and National Football League. The two players at the forefront of this sinister story are Stanford graduate Jonathan Martin and problematic NFL bully Richie Incognito. On October 28, 2013, Jonathan Martin had enough of the childish and racially influenced taunts at the hands of some of his teammates.  In the team cafeteria, Martin’s tormentors jokingly said they wouldn’t sit with him, and that Martin’s reaction to the joke was that he “flipped out, smashed a food tray on the ground, took off, and they haven’t seen him since.” Martin was subsequently listed on the injury report with an unspecified injury and missed the Dolphins’ game on October 31. It was later reported that during this period Martin had briefly checked into a hospital for emotional distress before flying to his parents’ home in California, where he is “preparing a detailed document for his cooperation with a league investigation into a string of alleged multiple incidents he says led to his emotional distress and exit from the team.”

On November 2, it was reported that Richie Incognito’s ring-leading role in the harassment of Martin dating as far back as the 2012 season was being reviewed by the NFL Players Association. On November 3, Incognito was suspended by the Dolphins for “conduct detrimental to the team.” On November 4, it was reported that Richie Incognito made threats against Martin and Martin’s family and used racial slurs in a voicemail left on Martin’s phone.  Jonathan Martin has a very impressive family tree that commands attention: Martin’s father, Gus Martin, is a Harvard University graduate and a professor of criminal justice administration at California State University, Dominguez Hills. His mother, Jane Howard-Martin, is also a Harvard graduate and is a corporate lawyer for Toyota. Martin has a total of nine relatives who graduated from Harvard including his grandfather, a professor in international development, and his maternal great grandfather, one of a dozen African-American students there in the 1920s. 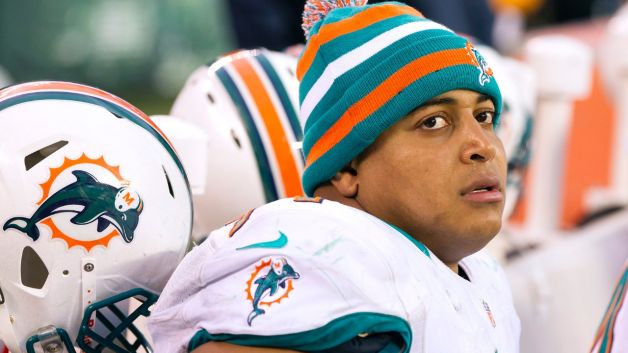 Martin attended Harvard-Westlake School in Los Angeles, California. He was an all-section and All-Mission League selection as a senior in 2007 and earned All-Mission League honors as a junior in 2006. Regarded as a three-star recruit by Rivals.com, Martin was ranked as the No. 44 offensive tackle prospect in the class of 2008, which was highlighted by Mike Adams and Matt Kalil. Martin held offers from Mississippi, UCLA, and Utah, but narrowed his decision down to Stanford, which offered him an athletic scholarship, or Harvard, which does not offer athletic scholarships. He committed to the Cardinal on January 11, 2008.

Richie Incognito once bullied a teammate so badly that the teammate suddenly got up from the ground and stomped out of football practice. It was early 2002 — long before Incognito was accused of similar behavior with the Miami Dolphins.  Incognito was just a freshman at Nebraska, but that didn’t stop him from picking fights or harassing teammates, in this case a non-scholarship offensive lineman named Jack Limbaugh. Incognito plowed into Limbaugh’s back during practice, knocking him to the ground for no apparent reason.

Limbaugh responded by getting up, grabbing his equipment and walking out, according to the diary of teammate David Kolowski. “Richie was a guy who came in with all the talent in the world, and Jack was an easy mark for a guy like Richie, who came across as a bully,” Kolowski told USA.  The issues stretch back at least as far as his Nebraska years, when he was convicted of misdemeanor assault and suspended from the team at least two times before transferring to Oregon in 2004. He often instigated fights with teammates and was ejected from a game for fighting in 2002. In 2003, he allegedly spat at opponents in the Alamo Bowl. Oregon even cut him loose before he participated in a single practice.

“He didn’t know where to draw the line,” said Kolowski, who published Diary of a Husker.

In the NFL, he quickly gained a reputation as a dirty player, even being voted as the leagues dirtiest in a 2009 survey by the Sporting News.  The St. Louis Rams gave up on him after he head-butted two opponents in 2009, the latest of the 38 penalties he committed with the Rams in four seasons. The Buffalo Bills claimed him, but dumped him after three games, leading him to Miami, where he seemed to settle down after signing in 2010. He spoke of getting treatment for depression and learning from his mistakes.  But in August, Houston Texans defensive end Antonio Smith ripped off Incognito’s helmet and swung it at his face. He said Incognito instigated it — a common accusation from opponents, who say he pinches them in piles and takes cheap shots at them when he can get away with it.  Kolowski, his old teammate at Nebraska, called him “hyper-active.”Jackson, the former NFL defensive lineman, called him something else.

“Richie Incognito is… a dirty and disrespectful player,” Jackson said on Twitter. “For those wondering…I played him 4 timed when I was with Seattle. We all knew to watch our KNEES and be alert for his antics.”

Attorney David Cornwell, who is acting as counsel for Miami Dolphins offensive tackle Jonathan Martin while he sorts out this increasingly ugly situation with Richie Incognito and perhaps other teammates, issued a statement on Martin’s behalf Thursday night.  And it’s quite disturbing, if true.

Cornwell wrote:
“Jonathan Martin’s toughness is not at issue. Jonathan has started every game with the Miami Dolphins since he was drafted in 2012. At Stanford, he was the anchor for Jim Harbaugh’s “smash mouth” brand of football and he protected Andrew Luck’s blind side. The issue is Jonathan’s treatment by his teammates. Jonathan endured harassment that went far beyond the traditional locker room hazing. For the entire season-and-a-half that he was with the Dolphins, he attempted to befriend the same teammates who subjected him to the abuse with the hope that doing so would end the harassment. This is a textbook reaction of victims of bullying. Despite these efforts, the taunting continued. Beyond the well-publicized voice mail with its racial epithet, Jonathan endured a malicious physical attack on him by a teammate, and daily vulgar comments such as the quote at the bottom. These facts are not in dispute.  Eventually, Jonathan made a difficult choice. Despite his love for football, Jonathan left the Dolphins. Jonathan looks forward to getting back to playing football. In the meantime, he will cooperate fully with the NFL investigation.”

The statement ended with what Cornwell said was an anonymous quote from a teammate claiming he was going to have unprotected sex with Martin’s sister.

Wow.  Do note: The quote from the “teammate” Cornwell refers to at the end is not named. That makes it possible that it was someone other than Incognito, and perhaps that more players were involved, as the plural “teammates” earlier in the post suggests. You’d have to think that the vulgar quote was recorded in some way, as the previously released voicemail quotes were. The statement also mentioned “malicious physical” abuse, and now this thing officially has gotten ugly. Expect other names and details to continue to get dragged into this.