Letter From The Editor: The Michael Sam Story

Posted by stunner3baby | On April 15, 2014 | Leave a comment | Under: Claude Julian, Columnists, Features, Letter From The Editor

A courageous all-American defensive lineman, Michael Sam from the University of Missouri, publicly revealed that he’s gay on (Sunday, February 9, 2014), creating the possibility he’ll be the first openly gay player drafted by the National Football League. He said he told his Missouri teammates in August and suffered no repercussions. He said he was surprised to discover many people in the media already knew he was gay.

“I understand how big this is,” Sam said in an ESPN interview. “It’s a big deal. No one has done this before. And it’s kind of a nervous process, but I know what I want to be … I want to be a football player in the NFL. I just want to make sure I could tell my story the way I want to tell it. I just want to own my truth.”

Sam, at 6-foot-2 and 260 pounds, starred in college football as a fiery pass rushing defensive end machine. Besides being first team All-American, he was named the top defensive player in the Southeastern Conference, considered the nation’s best league. Teammates named him the team’s most valuable player. Sam led the SEC with 11.5 sacks, and 19 tackles for a loss. Many NFL draft projections see him as a likely mid-round pick, with some saying Sam could go as high as the third round, with a possible position switch to outside linebacker. He is rated as the 12th-best outside pass-rusher in the draft by ESPN Scouts Inc. His agent (Joe Barkett) said that he does not think Sam’s decision to acknowledge his sexual orientation will hurt his draft prospects.

“I think, if anything, teams will look at it and see a guy who was honest and upfront instead of waiting until after the draft to potentially make his announcement, Mike was forward, and he wants the team who drafts him to accept him for who he is.”

Sam’s announcement comes as the federal government expands its recognition of same-sex marriages. Attorney General Eric Holder said the Justice Department will issue a memo that extends the federal government’s recognition of same-sex marriages, even in the 34 states that don’t consider it legal. Other athletes have come out as gay, but they didn’t have Sam’s profile. GLAAD, a lesbian, gay, bisexual and transgender media advocacy group, said Sam is “the latest high-profile athlete to come out as LGBT. Others include the NBA’s Jason Collins, the WNBA’s Brittney Griner, WWE’s Darren Young, UFC’s Liz Carmouche, MMA’s Fallon Fox and Major League Soccer’s Robbie Rogers.” 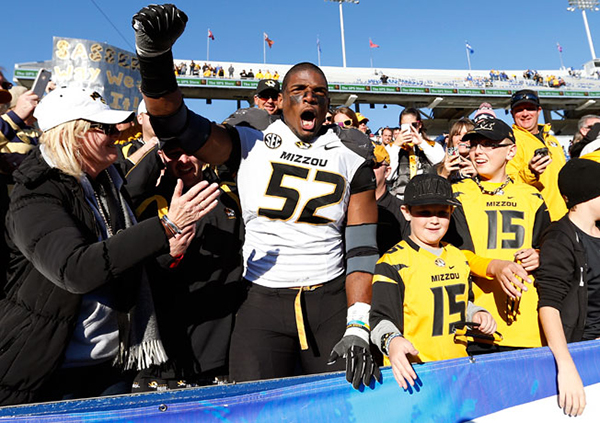 The Michael Sam Story – at University of Missouri 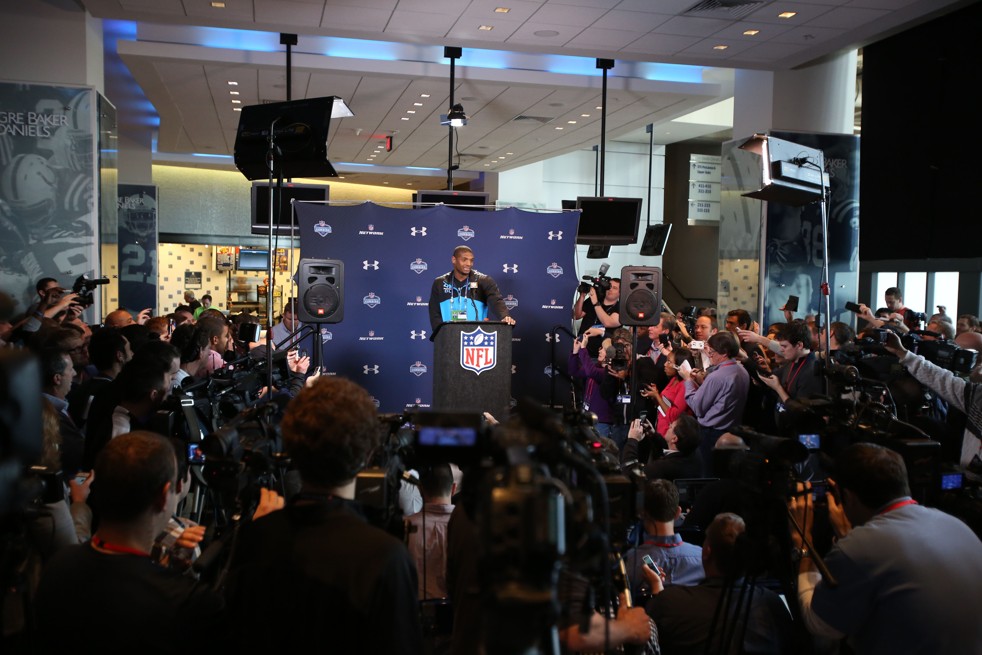 Michael Sam Sr. told The New York Times that he received the news when his son wrote in a text: “Dad, I’m gay.” Sam’s father took the news hard. He said he was eating at a Denny’s restaurant but had to leave after receiving the text. “I couldn’t eat no more, so I went to Applebee’s to have drinks,” Sam Sr. told the newspaper. “I don’t want my grandkids raised in that kind of environment.”

“As a black man, we have so many hurdles to cross. This is just one he has to cross,” Sam Sr. told The Times.
Michael Sam upbringing in Hitchcock, Texas, was filled with adversity. As such, he told ESPN that his decision to come out seemed easy compared to the tragedy he has had to endure.

“I endured so much in my past: seeing my older brother killed from a gunshot wound, not knowing that my oldest sister died when she was a baby and I never got the chance to meet her,” he said. “My second-oldest brother went missing in 1998, and me and my little sister were the last ones to see him … my other two brothers have been in and out of jail since eighth grade, currently both in jail.  Telling the world I’m gay is nothing compared to that.”

On February 23, 2014, the much anticipated workout for University of Missouri defensive end Michael Sam at the NFL Scouting Combine. The NFL Scouting Combine is a week-long showcase occurring every February at Lucas Oil Stadium in Indianapolis, where college football players perform physical and mental tests in front of National Football League coaches, general managers, and scouts. With increasing interest in the NFL Draft, the scouting combine has grown in scope and significance, allowing personnel directors to evaluate upcoming prospects in a standardized setting.   Athletes attend by invitation only. Implications of one’s performance during the combine can affect perception, draft status, salary, and ultimately career. The draft has popularized the term “workout warrior,” whereby an athlete’s “draft stock” is increased based on superior measurable qualities such as size, speed, and strength, despite having an average or sub-par college career.

“I was kind of disappointed in my vertical jump,” Sam told the NFL Network after his workout. “I think I was over-thinking. My vertical jump was the most disappointing.”

Overall, Sam said: “I thought I did pretty good. It was a great experience being able to show my quality to the scouts and coaches.” Sam and the rest of the Mizzou draft prospects will get another chance to work for NFL teams at Mizzou’s Pro Day on March 20.”

For more on the gamechanger Michael Sam,  visit