“The Best Man Holiday” reunites an all-star cast of American-American actors reprising their roles from the 1999 film released on November 15, 2013 by Universal Pictures, stars Taye Diggs, Terrence Howard, Harold Perrineau, Morris Chestnut, Monica Calhoun, Sanaa Lathan, Nia Long, Melissa De Sousa and Regina Hall.  It’s not that often studios are able to green light a sequel to a film that was never seen as a franchise. In 1999, Malcom D. Lee scored a hit with his written, directed film; “The Best Man.” Lee introduced a crop of newcomers to the scene while also reigniting the careers of others. The film opened number one at the box office and would later become an urban classic. Nearly 15 years later, the cast is back for a reunion. 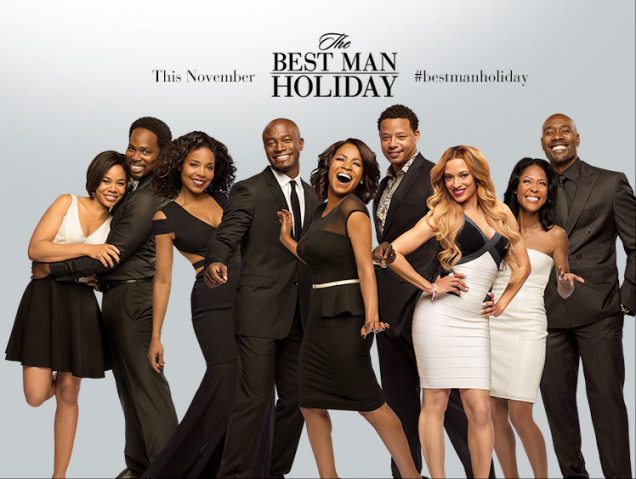 Years have passed since football player Lance Sullivan (Chestnut) married Mia (Calhoun) after discovering the fact that she had an affair with his best friend, Harper Stewart (Diggs), back when they were in college. Stewart has disclosed this indiscretion in his first book. At present time, Mia has gathered the crew back together to celebrate the holidays over at her house with Lance and their four kids. Lance, playing for the New York Giants, is set to break the rushing record, while Harper is having writer’s block, having failed at his second book and dealing with pregnant wife Robyn (Lathan), a rising chef who’s had some miscarriages. Adding to their stressful lives is the fact that money is drying up since he hasn’t told Robyn about their financial difficulties.

Harper goes to meet with his agent Stan who tells Harper he needs to write a book similar to his first one, “Unfinished Business”, as his last book was a flop. After Harper reveals to Stan that he’s been fired from his teaching job at NYU, Stan pitches the idea of Harper writing an unauthorized biography of Lance. Insisting against the biography idea, Harper then goes to visit Jordan Armstrong who is now a successful MSNBC TV executive. While catching up with Harper, Jordan’s White boyfriend Brian (Eddie Cibrian) walks in, inspiring Jordan to become the butt of some teasing by Harper. After leaving the office, Harper sets his mind on going to Mia and Lance’s with the ulterior motive of pitching the bio idea to Lance.  While tension still exists between the former roommates, Harper is looking to have Lance’s story be the center for his next book and looking for help from Jordan (Long).

Joining the festive celebration are Julian (Perrineau) and his former stripper-now social activist wife Candance (Hall), along with their two daughters. Julian is a private school administrator looking for new funding once a huge contributor declines donating more money after viewing Candace in a YouTube video, during her stripper days. Quentin (Howard) is still a bachelor but successful businessman. Sexual energy fills the air once reality-TV star Shelby (De Sousa), Julian’s former girlfriend and Quentin’s one-time jump-off, shows up with her daughter.

As you can imagine, placing all these personalities under one roof provides many unpredictable moments. All of the couples in the house have sex that night, while Q sends photos of his privates to Shelby. Harper goes down to the kitchen, where he and Jordan make some small talk, and Jordan says she knows that Harper is writing a bio on Lance. As Harper is headed back to bed, he finds Mia throwing up blood. Mia reveals to Harper that she is dying of cancer, and has had the illness for over a year. After Lance walks in on the two talking, Mia explains to Lance that Harper knows; however, they both ask Harper to keep the condition a secret from everyone else.

The next morning at breakfast Q and Shelby mix up their phones. Because Q had watched some of Candace’s video, Shelby becomes aware of the video and attempts to use this to her advantage to get back with Murch. Candace then confronts Shelby and a catfight breaks out, causing Candace to leave the house with her and Murch’s kids. The guys all head to Lance’s football practice where Q and Murch almost come to blows in back of the car. While at the practice Q explains to Murch that the video is part of the territory when marrying a stripper. Back at the house the ladies are preparing for a spa day, when Mia collapses while trying to hang a Christmas ornament. Robin and Jordan send Harper a text telling him to come home, which forces Harper to tell the rest of the friends what’s going on. As Lance is leaving practice, his friends all embrace him and they head home.

Back at the house, everyone spends time with Mia. While Harper is wrapping gifts, Lance approaches him and the two have a heart-to-heart. As a result, the two seem to move on from their past tribulations. The next day the gang heads to a shelter where they are volunteering. Q is Santa Claus, while Harper and Lance seem to be as close as they were in the old days. After the volunteer work is done, Lance sees a mock book cover for his own unauthorized bio on Harper’s iPad. Lance confronts Harper and tells him to stay away from him and his family. Mia tries to no avail to calm Lance down. Later, Q and Harper are the only ones left at the shelter. The two get to talking when Q asks Harper if he is in any financial trouble. Harper finally breaks down and admits that he is.

Back at Lance and Mia’s house, Lance is still heated over the bio when Mia confronts him. In regards to Lance and Harper’s long-lasting feud, Mia explains how she’s just to blame as much as Harper is. Mia reveals to Lance that she slept with Harper even though she knew how much it would hurt Lance as she was sick of Lance cheating on her. Mia then takes off her wig, showing just how severe her condition really is.

Outside of the house, Robin is going through some of Mia’s old baby things when Candace returns with the kids. Candace and Murch make up, as Candace reveals to Murch she only performed “extra services” for a customer once and has regretted it ever since. That night everyone is gathered around the fireplace listening to all the kids sing Christmas carols. Harper and Q return, with Harper making amends with Robin. The next day is Christmas and Lance’s big game. Brian returns to be with Jordan, and the two make up. The ladies all watch the game together as a family in Mia and Lance’s bedroom, while all of the guys go to the game. At the game, Lance starts a troublesome first half. Mia calls Harper to speak to Lance, inspiring him to ultimately break the all-time rushing record in a game-winning performance. While Mia’s condition worsens, she and Lance cuddle one last night together.  At the funeral, everyone is pretty emotional except for Lance. Shelby gives Julian a check for two million dollars, covering the school expenses he didn’t get when the donor pulled out. You’ll be amazed by the gorgeous set designs and Christmas music by the likes of Nat King Cole, Mary J Blige, New Edition, and R Kelly.

The Best Man Holiday debuted on November 8th with a $10.7 million Friday total, notably beating Thor: The Dark World for the top box office spot of that day. The Best Man Holiday did even better the next day earning $12.4 million. It then went on to be the number two film of the weekend, taking in close to $30.6 million.

FOR MORE OF THE HIT ROMANTIC COMEDY “THE BEST MAN HOLIDAY”, VISIT