Man! I love watching adrenaline rush movies during the hot summer release season. “Mission Impossible: Rogue Nation” delivers a pure in-your-face knock-out punch of cinema magic. The IMF crew disbanded, and Ethan Hunt (Tom Cruise) is out in the cold while the team now faces off against a network of highly skilled special agents, the Syndicate. These highly trained operatives are hell bent on creating a new world order through an escalating series of terrorist attacks. Ethan gathers his team and joins forces with disavowed British agent Ilsa Faust (Rebecca Ferguson), who may or may not be a member of this rogue nation, as the group faces their most impossible mission yet. 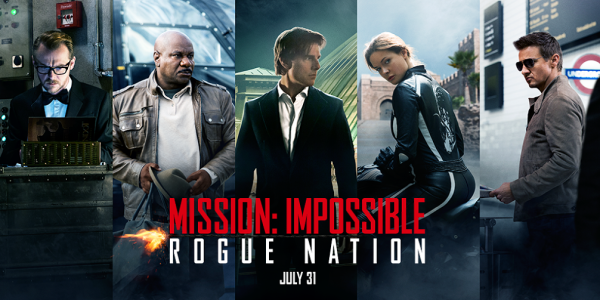 After intercepting nerve gas being sold to terrorists, Ethan is convinced he can prove the existence of “The Syndicate”, an international criminal consortium. Reporting to an IMF substation to receive his next orders, “The Syndicate” rolls in to capture Hunt who escapes a highly dangerous torture chamber led by Syndicate member Janik “Bone doctor” Vinter (Jens Hulten) with the help of disavowed M16 agent and Syndicate operative Ilsa Faust (Rebecca Ferguson).

Wow! CIA director Alan Hunley (Alec Baldwin) makes his debut in “Mission Impossible.” IMF agent William Brandt (Jeremy Renner) appears before a Senate oversight committee, and Hunley succeeds in having the IMF disbanded and absorbed into the CIA, guaranteeing that Hunt will be captured within the day. Six months later, Hunt remains on the run. Unable to find “The Syndicate” without help, he enlists former colleague Benji Dunn (Simon Pegg), arranging for him to attend the opera Turandot in Vienna to search for Lane, whom he suspects is the Syndicate’s leader. Despite stopping three shooters including Faust, the Austrian Chancellor is killed by a car bomb.

Brandt recruits former agent Luther Stickell (Ving Rhames) to find Hunt and prevent Hunley’s team from killing him. Using a likeness of Faust left by Hunt, Brandt and Stickell are able to track Hunt, Dunn, and Faust to Morocco, where the three are infiltrating a secure underwater server beneath a power station. Tom Cruise trained under diving specialist (Kirk Krack) to be able to hold his breath for six minutes to perform an underwater sequence which was filmed in a single long take with no edits.

You’ll witness some breathtaking and outlandish stunt sequence, leaving you mesmerized. Filming of an action scene featuring Ethan Hunt reportedly climbing and fighting on the outside of a flying Airbus A400M Atlas took place at RAF Wittering in the United Kingdom. Cruise performed the sequence, at times suspended on the aircraft 5000 feet in the air, without the use of a stunt double.

After having stolen what they believe to be a ledger containing the names of all Syndicate agents, Faust takes the drive and a chase ensues involving Ethan, his group, Syndicate members, and Faust. Faust escapes, but Dunn reveals he had already made a copy of the data. Brandt contacts Hunley and reveals their location. At a charity auction, the two try to prevent Hunt from attacking the Prime Minister, whom they and Attlee take to a secure room. Hunt, having posed as Attlee, reveals himself and has the Prime Minister confirm the existence of the Syndicate, a classified project to perform missions without oversight, though the Prime Minister said he had ordered the project cancelled before it could leave the planning stages, as he considered it to be too extreme. When the real Attlee arrives, Hunt subdues him and he admits that he had been covering up the existence of the Syndicate since Lane hijacked the project and went rogue.

I don’t want to spoil the rest of this “Mission Impossible” action thriller storyline. As of August 4, 2015, “Mission Impossible: Rogue Nation” has grossed $69.5 million in North America and $65 million in other territories for a worldwide total of $134.5 million, against a budget of $150 million.  It had a worldwide opening of $121 million and an IMAX worldwide opening total of $12.5 million (the third biggest of July behind The Dark Knight Rises and Harry Potter and the Deathly Hallows – Part 2).