In a bold move to reveal a personal secret throughout his vast NBA career, Washington Wizards center Jason Collins — who’s been playing in the NBA since 2001 — has revealed he’s gay, making him the first major active American male pro athlete to come out of the closet! Collins revealed the news in an article for Sports Illustrated saying, “I’m a 34-year-old NBA center. I’m Black. And I’m gay.” He continued, “I didn’t set out to be the first openly gay athlete playing in a major American team sport. But since I am, I’m happy to start the conversation.” Collins and his twin brother Jarron have been high profile athletes since high school when they were two of the highest rated prep players in the country. They both went on to become standouts at Stanford and were each drafted into the NBA in 2001.  Jason says he didn’t come out to his twin until last summer.

“I’m glad I can stop hiding and refocus on my 13th NBA season,” Jason revealed.

NBA stars Kobe Bryant and Tony Parker are rallying behind Collins, tweeting messages of support. Kobe wrote, “Proud of @jasoncollins34. Don’t suffocate who u r because of the ignorance of others.” Tony added, “Really hope people will RESPECT Jason Collins for his decision to come out. Just glad he can now relax and not be afraid to be who he is.”

Former Cal standout Jason Kidd, who played with Collins in New Jersey, wrote: “Jason’s sexuality doesn’t change the fact that he is a great friend and was a great teammate.” The reaction was no different in the Bay Area. Warriors President Rick Welts, the highest-ranking openly gay NBA executive, tweeted that he was “very proud” of Collins.

“Jason is an exceptional person who put a great deal of thought into this decision. … I support him, along with his family and former teammates who have nothing but respect for Jason.” 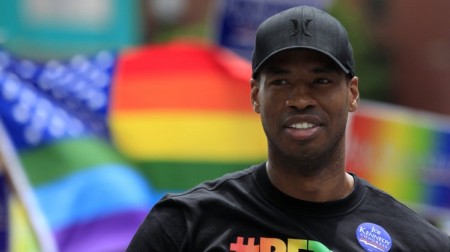 Collins attended the Harvard-Westlake School in Studio City and, along with twin brother Jarron, helped Stanford basketball become a Pac-12 powerhouse in the late 1990s. Support for Collins has poured in, including from former President Bill Clinton. “I have known Jason Collins since he was Chelsea’s classmate and friend at Stanford,” Clinton said in a statement. “Jason’s announcement today is an important moment for professional sports and in the history of the LGBT community. It is also the straightforward statement of a good man who wants no more than what so many of us seek: to be able to be who we are; to do our work; to build families and to contribute to our communities.

“For so many members of the LGBT community, these simple goals remain elusive. I hope that everyone, particularly Jason’s colleagues in the NBA, the media and his many fans extend to him their support and the respect he has earned.” NBA commissioner David Stern said he’s proud of Collins stepping forward. “As (deputy commissioner) Adam Silver and I said to Jason, we have known the Collins family since Jason and Jarron joined the NBA in 2001 and they have been exemplary members of the NBA family,” Stern said. “Jason has been a widely respected player and teammate throughout his career and we are proud he has assumed the leadership mantle on this very important issue.”

Clinton’s daughter Chelsea, who knew the player from Stanford, tweeted: “Very proud of my friend Jason Collins for having the strength & courage to be the first openly gay player in the NBA.”

Collins was also college roommates with another member of an American political dynasty: Rep. Joe Kennedy III, D-Mass. In his account, Collins wrote that he realized he needed to go public when the congressman walked in Boston’s gay pride parade last year — and Collins couldn’t join him. Kennedy tweeted Monday that “I’ve always been proud to call (Collins) a friend, and I’m even prouder to stand with him today.”

Mostly a backup in his career, Collins has averaged 3.6 points and 3.8 rebounds for the Nets, Grizzlies, Timberwolves, Hawks, Celtics and Wizards. He was traded from Boston to Washington in February. Collins was the 18th pick in the first round of the 2001 NBA draft.