Lebron James is one of the most talented and dynamic superstars in the National Basketball Association. James’ vision to power broker his basketball career is nothing short of genius. On June 25, 2014, James shocked the sports world and created a power shift in the coming (2014-15) NBA season by opting out of his contrast with the Miami Heat, officially becoming a unrestricted free agent on July 1. On July 11, he revealed via a first-person essay in Sports Illustrated that he intended to rejoin the Cleveland Cavaliers. On July 12, 2014, he signed a two-year contract with the team for $42.1 million with an option to become a free agent again after the (2014-2015) season. James won two NBA titles as a member of the Miami Heat.

James bolted from the Cleveland Cavaliers franchise during his infamous announcement live on ESPN called, “The Decision” (July 2010). At the time he declared that he would sign with the Miami Heat. James drew incredible criticism from sports analysts, executives, fans, and current players in addition to former players for leaving the Cavaliers. “The Decision” was scrutinized and viewed as unnecessary. Many thought the prolonged wait for James’ choice was unprofessional as not even the teams courting him were aware of his decision until moments before the show. Upon learning that James would not be returning to Cleveland Cavaliers owner Dan Gilbert published an open letter to fans in which he aggressively denounced James’ actions. Some angry fans led an emotional protest characterized by the infamous burning of his number 23 jersey. James quickly gained a reputation as one of America’s most disliked athletes, a radical change from years prior. The phrase “taking my talents to South Beach” became a punch line for critics, haters, and disenchanted fans.

Prior to taking flight to South Beach, the self-proclaimed “King James” was represented by agent Rich Paul of Klutch Sports however early in James career, his first agent was Aaron Goodwin.  Shortly thereafter in 2005, Leon Rose took over as James’ agent. Rose joined Creative Artists Agency (CAA) in 2007 and worked with fellow CAA agent Henry Thomas (Dwyane Wade’s and Chris Bosh’s agent) to bring James to Miami in 2010. Two years later, the 6’8 forward powerhouse cut ties with CAA to join forces with Paul in 2012. It wasn’t long before childhood friends,  James, Paul, Maverick Carter, along with Randy Mims formed an agent and sports-marketing company entitled LRMR after the NBA superstar parted ways with Goodwin. LRMR handles James’ marketing, and was criticized for its role in the marketing of “The Decision.”

James has numerous endorsement contracts with the following powerhouse companies such as Audemars Piguet, Coca-Cola, Dunkin’ Brands, McDonald’s, Nike, State Farm, and Samsung.  Coming out of high school, he was the target of a three-way bidding war between Nike, Reebok, and Adidas, eventually signing with Nike for $90 million. Fenway Sports Group became the sole global marketer of his rights, and as part of the deal, he was granted minority stakes in the English Premier League football club Liverpool F.C. In 2014, James traveled to Brazil to watch what he called “the greatest sporting event he’s ever been to.” James has a special love for soccer, especially Liverpool, so attending the World Cup was a bucket list moment for him.

As a result of James’ endorsement money and NBA salary, he has been listed as one of the world’s highest-paid athletes. In 2013, he surpassed Kobe Bryant as the highest paid basketball player in the world with earnings of $56.5 million. In 2014, James took home a profit of more than $30 million as part of Apple’s acquisition of Beats Electronics. He struck a deal to get a small stake in the company at its inception in exchange for promoting its headphones. James and football star Johnny Manziel of LRMR officially lead both the NBA and NFL in jersey sales. 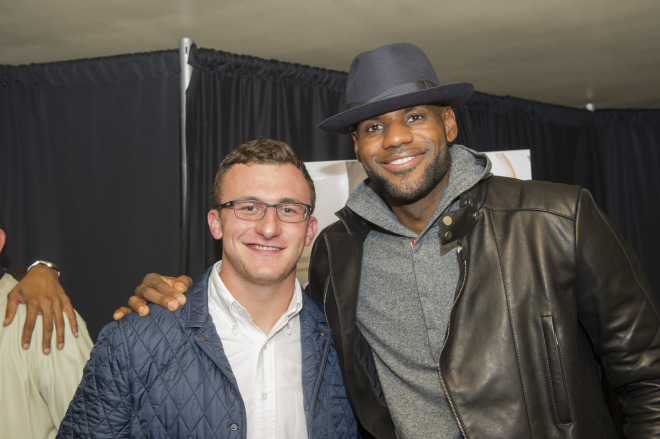 Recently his LRMR teammate, Johnny Manziel, joined him by topping Russell Wilson, Colin Kaepernick and Peyton Manning in earnings. This is the highest salary a Cleveland Browns player has ever achieved since the league began keeping record. With guidance from LRMR CEO Maverick Carter, Manziel made his first endorsement move as an NFL quarterback. Johnny signed a deal with Cleveland’s Bernie Moreno and The Collection Auto Group. The deal puts Johnny behind the wheel of and at the forefront of Collection’s Nissan brand.  James’ return to the Cleveland Cavaliers influenced one of the premier NBA power forward’s Kevin Love to agree to join him and all-star point guard Kyrie Irving. After a brief phone conversation following Lebron’s official recommitment to the Cavaliers, the Cavaliers franchise player shared a spirited discussion of the possibility of Love joining forces to pursue an NBA Championship. James is a great admirer of Love’s overall skills and basketball I.Q. On August 23, 2014, the Minnesota Timberwolves traded Love to the Cleveland Cavaliers in a three-team trade. The Timberwolves received 2014 and 2013 first round draft choices Andrew Wiggins and Anthony Bennett from Cleveland, and Thaddeus Young from the Philadelphia 76ers, while the Philadelphia 76ers received Luc Mbah a Moute and Alexey Shyed from Minnesota in addition to a 2015 first-round draft pick from Cleveland. Love will wear number zero with Cleveland due to the number 42 being retired by Nate Thurmond.

Will the new “Big 3” in LeBron James, Kevin Love, and Kyrie Irving propel the Cleveland Cavaliers to their first NBA Championship? Only time will tell. Stay tuned .