Stunner Baby Magazine is very intrigued with the cutting-edge crime drama television series, “The Blacklist” that appeared on NBC on September 23, 2013. For decades, ex-government agent Raymond Red Reddington (James Spader) has been brokering shadowy deals for criminals across the globe, making him one of the FBI s most wanted fugitives. Now, he has surrendered to the FBI with a mysterious offer: He will help catch a long-thought-dead terrorist, Ranko Zamani, under the condition that he speaks only to Elizabeth Liz Keen (Megan Boone), an FBI profiler fresh out of Quantico.

After the FBI uses Reddington’s information to locate a terrorist, Reddington reveals that this terrorist is only the first of many criminals that he will help them neutralize. Over the course of his own criminal career, he has made a list of global criminals who he believes are truly dangerous to society, most of whom are unknown to the FBI. He calls it The Blacklist. He is known for brokering deals between criminals, and is called “The Concierge of Crime”.

Reddington’s ethics are somewhat of a mystery, and his keen insight into the underworld’s terrorist paradigm, uses some crimes (such as murder, torture, and extortion) in the service of “the greater good”. He uses his arrangement with the FBI to pursue his own secret agenda. He has an unexplained interest in Elizabeth Keen, and knows personal secrets about her that she has never made public. FBI Special Agent Elizabeth Keen, a rookie profiler. She is the only person with whom Reddington is willing to work. She has yet to learn why, but he has told her that it has something to do with her missing father. 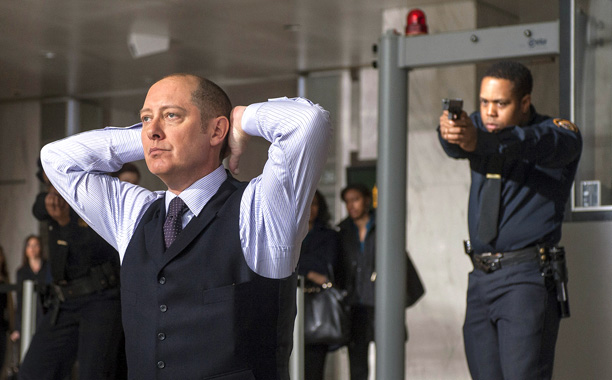 FBI Special Agent Donald Ressler (Diego Klattenoff) is a stickler for procedure. He dislikes having to work with a criminal like Reddington, but he acknowledges that Reddington does get results. Tom Keen (Ryan Eggold), Elizabeth’s husband. He’s a schoolteacher and has a somewhat preppy appearance and disposition. He is possibly living a double life, accused of being in bed with terrorists. Harold Cooper (Harry Lennix), Assistant Director of the FBI Counterterrorism Division. He had a particular interest in Reddington’s past, and is willing to oblige Reddington’s unusual requests due to this understanding of him.

Robert Bianco of USA Today said, “The Blacklist is a solid weekly crime show built around a genuine TV star. That’s the kind of series the networks have to be able to pull off to survive. And with Spader in command, odds are NBC will.

NBC’s “The Blacklist” is the first really terrific new series of the fall season. It’s also proof that broadcast TV can still compete with cable, even with a show whose basic plot has been reworked in film and TV with consistent regularity for decades. As basic and premium cable push the boundaries of creativity with shows like “Mad Men,” “Homeland,” “Breaking Bad” and “The Walking Dead,” broadcast is often taken to task for a perceived lack of imagination. The Blacklist provides a potent punch of adrenaline as you think you know this situation and how it will turn out, but there are surprise, yet entirely credible, twists throughout season one. On December 3, 2013, NBC renewed the show for a 22-episode second season.

TO LEARN MORE ABOUT HIT NBC DRAMA “THE BLACKLIST”, VISIT