CHICAGO, IL – Stunner Baby Magazine notes the recent announcement that Chicago will represent the U.S. as World Wildlife Fund’s (WWF) 2014 Earth Hour Capital, and in his capacity as the first Super Hero ambassador for Earth Hour, Spider-Man will make a rare public appearance at the City of Chicago’s official Earth Hour Celebration.

On Saturday March 29, 2014 from 6:30PM – 9:30PM CT, the City of Chicago, WWF and Sony Pictures will host a celebration in recognition of Earth Hour. Chicagoans are invited to join the festivities, which will be held at the Chicago Cultural Center’s famed Preston Bradley Hall. Guests will have the opportunity to meet and have their picture taken with Spider-Man, learn about how they can be a super hero for the planet by taking actions to realize the goal of a sustainable Chicago, and join in activities like face painting and prize drawings. The first 400 guests will each receive an exclusive glow-in-the-dark t-shirt from the film.

Earth Hour itself is recognized at 8:30 p.m. local time around the world. In Chicago, as Spider-Man helps flip the ceremonial switch to turn off the lights in the city, a glow-in-the-dark painting by Chicago artist ZORE64 will be unveiled. The original artwork was inspired by Earth Hour’s mission to raise awareness of the impact humans, both with super powers and without, have on the environment.

Columbia Pictures, the studio behind The Amazing Spider-Man film franchise, has an established history of environmental responsibility. Expanding on many sustainability efforts over the years, The Amazing Spider-Man 2 became the most eco-friendly tent pole production in the history of the studio. These environmental efforts, on set and off, were supported at every level – from producers, studio executives, and cast and crew and began as soon as the film went into pre-production. In addition, the studio confirms it is purchasing carbon offsets that render the physical production of  “The Amazing Spider-Man 2″, as well as its publicity tour, carbon-neutral.  Recently, Mayor Rahm Emanuel announced that Chicago has been named the 2014 Earth Hour Capital of the U.S. by the WWF’s Earth Hour City Challenge, a year-long competition among cities to promote renewable energy and prepare for climate change.  The city will receive a $30,000 grant from WWF to put towards a solar purchase program for residents. 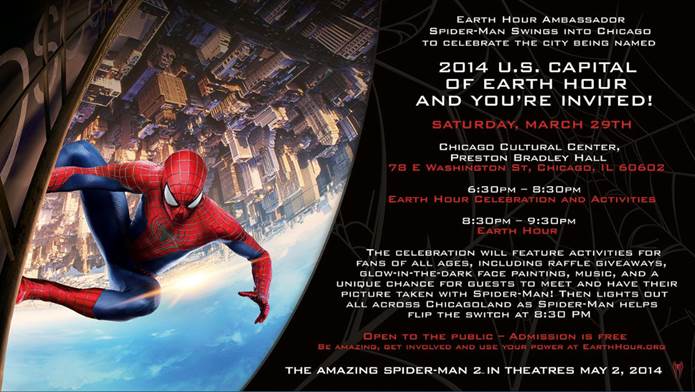 Mayor Emanuel has long made climate change a priority for the City of Chicago. In the fall of 2012, he released Sustainable Chicago 2015, the City’s action plan that defined initiatives, metrics and strategies that would advance Chicago’s goal of becoming the most sustainable city in the country. The road map defined seven categories critical to sustainable improvement in the city and set 24 specific goals and key actions to achieve them by 2015.

In the past year, the Mayor has made impactful strides toward a greener and healthier future by building off of the goals set out in Sustainable Chicago 2015 such as expanding curbside blue cart recycling citywide, establishing the Divvy bike share system, procuring municipal power coal-free, and giving more than 900,000 Chicagoans access to electricity from renewable energy such as wind and solar amongst other accomplishments.

Given the priority placed on environmental stewardship by Columbia Pictures and the City of Chicago, their partnership with WWF was a natural fit.

“Earth Hour is a movement full of super heroes – people harnessing the power of the crowd to inspire change for the good of the planet.  Imagine the possibilities when we come together and do more,” said The Amazing Spider-Man 2 director Marc Webb. As Earth Hour ambassador Spider-Man knows, “with great power comes great responsibility,” so be amazing, get involved and use your power at earthhour.org.

Stunner Baby Magazine is thrilled that The Amazing Spider-Man 2 will be released in theaters internationally beginning April 16, 2014, and in the U.S. on May 2, 2014. Spider-Man’s most important conflict has been within himself:  the struggle between the ordinary obligations of Peter Parker and the extraordinary responsibilities of Spider-Man.

But in “The Amazing Spider-Man 2″, Peter Parker finds that his greatest battle is about to begin. It’s great to be Spider-Man (Andrew Garfield).  For Peter Parker, there’s no feeling quite like swinging between skyscrapers, embracing being the hero, and spending time with Gwen (Emma Stone).  But being Spider-Man comes at a price:  only Spider-Man can protect his fellow New Yorkers from the formidable villains that threaten the city.  With the emergence of Electro (Jamie Foxx), Peter must confront a foe far more powerful than he.  And as his old friend, Harry Osborn (Dane DeHaan), returns, Peter comes to realize that all of his enemies have one thing in common:  Oscorp.  The movie is directed by Marc Webb, produced by Avi Arad and Matt Tolmach, screenplay by Alex Kurtzman & Roberto Orci & Jeff Pinkner.  Screen Story by Alex Kurtzman & Roberto Orci & Jeff Pinkner and James Vanderbilt.  Based on the Marvel Comic Book by Stan Lee and Steve Ditko. #SpiderMan

FOR MORE ABOUT EARTH HOUR AND THE AMAZING SPIDERMAN 2, VISIT