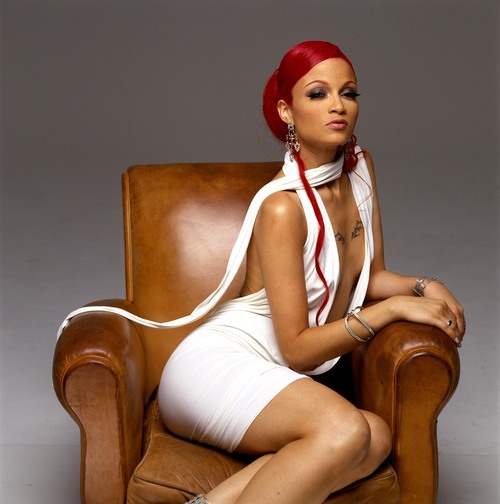 Stunner Baby Magazine is proud to provide media coverage for Charli Baltimore’s contributions to the rap industry as a female MC. Baltimore is no stranger to controversy linking her to scandal conflicts within the rap industry. The latest rumor is  that she’s currently married to 50 Cent, whom she beefed with back in her days with  Murder Inc. and The Black Wall Street.

Fresh off her debut with BMB Records mix-tape is Charli’s new video “Hunnids.”  The project was a reintroduction of the Grammy nominated emcee who is currently working on her upcoming full length CD “ETHOS” dropping in 2015.  Midwest legend Trick Trick directed “Hunnids” video in a stylized mini-movie complete with a clever plot, action, gritty Detroit backdrop and introduction of BMB Records’ newest artist Cash Paid.   The video tells a story and draws the viewer into a Motor City ghetto epic.

“Trick is a real visionary in terms of music and video direction… we wanted to take an old school approach with the visual for Hunnids,” explained Baltimore.  “We wanted to put out a video with an actual plot versus going a stereotypical route like a performance video with a bunch of big booty women dropping it like it’s hot.” No offense to Big Booty women!

Baltimore landed in the rap game in the summer of 1995, during a chance meeting with  The Notorious B.I.G.   Involved in a romantic relationship, B.I.G. introduced her to Lance “Un” Rivera, who signed her and Cam’ron to his new label, Untertainment. Baltimore made her first appearance in the music industry with Junior M.A.F.I.A’s “Get Money” playing B.I.G’s then wife Faith Evans. Her first video was in 1998 with the hit “Money” featured on the Woo movie soundtrack.  After a five-year hiatus, she was signed to Murder Inc. Records by Irv Gotti. Baltimore  experienced many album delays so she left the label. In 2006 she became affiliatedwith The Game and The Black Wall Street Records. She never signed to the label but appeared on mixtapes with the rest of The Black Wall Street dissing 50 Cent and his G-Unit squad.

Baltimore has made appearances in songs such as “Down 4 U”, “We Still Don’t Give A  F**k”, and “No One Does It Better” from Irv Gotti Presents The Inc, Ja Rule tracks “Down Ass Bitch” and “The Last Temptation”, the Christina Milian track “Spending Time” and Ashanti’s “Rain On Me” (remix).  In 2003, she earned a Grammy Award nomination for Best Female Rap Solo Performance, for her single “Diary.”  In 2008, Baltimore re-signed with The Inc. Records, as confirmed on an interview with  Wendy Williams and began work on an album called True Lies (formerly Controlling Charli), which still remains unreleased. She released an EP on iTunes featuring “Come Test Us” (with Lil Wayne), “Lose It” (previously unreleased explicit version), “P.S.” and previously unreleased track “Tattoo.”  In 2011, she appeared in the music video “If I Die Tonight” with Lue Diamonds and Trey Songz.

Charli Baltimore’s government name is Tiffany Lane. Her stage name is taken from actress Geena Davis’s character in the film “The Long Kiss Goodnight.” Baltimore has  two daughters, India and Sianni. She gave birth to her eldest daughter when she was 14 years old. Charli Baltimore now resides in Jersey City, NJ just across the Hudson River from Manhattan.

To view more of the controversial Charli Baltimore, visit