Shooting up the charts is her dramatic single, “The Worst.” There’s nothing like a woman scorned by a lover. Aiko shows just how far she’ll go for love in her new video ‘The Worst.’ It is a dark reality video for this hipster R&B’s Sade-like songstress provides a closer look at the bad girl hidden under her good girl image. She’s driven to murder after her relationship sours. Aiko leaves her man lying on the floor as she makes a peanut butter and jelly sandwich. The troubled woman then puts on her makeup and jewelry, washes her hands of any remaining blood and turns herself in to police waiting outside — all while wearing lingerie. As unbelievable as it sounds, Aiko has trouble finding a solid man in real life, too.

In a recent interview with Complex she reveals, “I’m single not by choice. Only because I found now that when I talk to guys, they’re wary because they know about Donald, they know I’ve worked with Drake. They’re always side-eyed, suspicious. But I’m loyal in relationships… just need a man to take charge.”

Aiko began her musical career contributing vocals to several B2K releases in 2002. She featured on tracks five through eight of the R&B group’s remix album B2K: The Remixes – Volume 1. “Santa Baby”, a cover she recorded, was also featured on their album Santa Hooked Me Up and she appeared as a guest vocalist on the song “Tease” from Pandemonium! Her song “Dog” appeared as a bonus track. Aiko was the opening act for B2K on their Scream Tour 3. 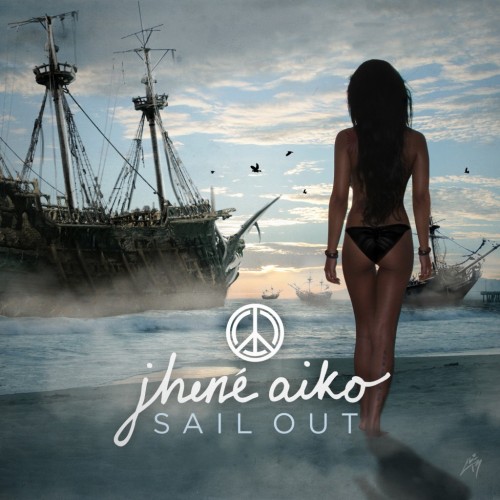 Drake’s “Would You Like A Tour?” began two months after his fourth annual OVO Fest on August 4-5, 2013 in Toronto, Canada. Singers Miguel, Future, Jhené Aiko, PartyNextDoor and The Weeknd accompany Drake as supporting acts during the tour during various stages, with other special guests making appearances. Aiko collaborated with Drake on his third album Nothing Was the Same (2013), lending her vocals on the tracks “Wu-Tang Forever” and “From Time”.

Aiko then released her debut EP Sail Out, on November 12, 2013. “Bed Peace” featuring Childish Gambino was released as the album’s second single on September 17, 2013. The EP features guest appearances from American rappers Vince Staples, Childish Gambino, Kendrick Lamar and Ab-Soul. The EP debuted at number eight on the US Billboard 200 chart, with first-week sales of 34,000 copies.

Aiko writes music everyday, often writing lines or a poem, and begins to add them to melodies. She describes her writing style as “freestyle,” where she just says how she is feeling, taking a day or up to a month to complete.  Aiko revealed that whilst writing music she enjoys being high in order to use the feeling as inspiration and that for the entire writing and recording process of her debut mixtape Sailing Soul, she was under the influence of marijuana. When writing for her debut studio album, she did the same, but recorded while sober.  Aiko places great importance on writing her own music, believing it defines her as an artist: “After each song I’ve lost like a piece of me, because I’ve put it into each song.

Aiko revealed her alter ego known as J. Hennessy, who first appeared on her debut extended play Sail Out. Aiko spoke about her alter ego saying she experiences twelve “different personalities in my head” every day. Aiko has received praise for her stage presence, and live performances. She has been praised for having organic sets with nothing “put on”, being compared to singer Sade. Furthermore Aiko has been noted for moving “fluidly” between each song on her set list. Critics noted that when performing, she doesn’t use “stiletto stomping and blaring high notes” and instead has an “ease and a calm that rides along ever so gently”.

The self-proclaimed “Remix King” DJ Ted Smooth drops another one of his musical revamps Aiko’s latest single “The Worst.” Borrowing the track from the classic Fugees hit “Ready Or Not,” Smooth gets Raekwon to drop a fresh new verse for a great mix that sounds like a completely new song. “This is already everybody’s favorite song so I just added a little spice, or Raekwon, to chef it up nice for the streets!!!