The cultural phenomenon and world class star announced his impending retirement (May 16, 2013) from soccer at the age of 38.  The sport has long had global stars, but none whose careers have soared through social technology, reality television and celebrity culture. Beckman was the athlete with the most crossover appeal at the moment when everyone could watch together, online or via satellite. 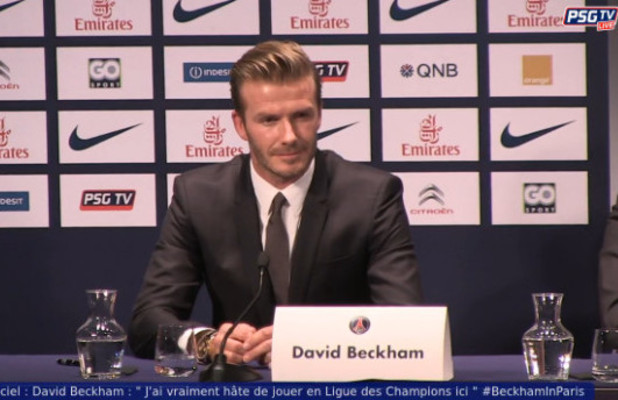 Beckham’s professional career began with Manchester United, where he made his first-team debut in 1992 aged 17. With United, Beckham won the Premier League title six times, the FA Cup twice and the UEFA Champions League in 1999. He then played four seasons with Real Madrid, winning the La Liga championship in his final season with the club. In July 2007 Beckham signed a five-year contract with Major League Soccer club Los Angeles Galaxy. While a Galaxy player, he spent two loan spells in Italy with AC Milan in 2009 and 2010.  In international football, Beckham made his England debut on 1 September 1996, at the age of 21. He was captain for six years during which he played 58 times. He has 115 career appearances to date.

Beckham has twice been runner-up for FIFA World Player of the Year and in 2004 was the world’s highest-paid footballer when taking into account salary and advertising deals. Beckham was the first British footballer to play 100 Champions League matches. When joining MLS in 2007 he was given the highest player salary in the league’s history of US$6.5m per year.

The Beckman international brand ingeniously blends his handsomeness that bordered on beauty with athleticism, marketing savvy and an eager embrace of pop icon.  He was as likely to appear in Vogue as in Sports Illustrated.  He was as popular appearing in underwear advertisements as in soccer uniform.