The Duchess was admitted to St Mary’s Hospital, London, in the early stages of labor on the morning of 22 July 2013 . She gave birth to a boy weighing 8 pounds 6 ounces at 16:24 BST (4:24pm EST) later the same day. The Duke was by his wife’s side when she gave birth, and he took the full two weeks’ paternity leave from his job as an RAF search and rescue pilot, allowed by the Ministry of Defense.

The birth took place in the Lindo Wing of St Mary’s Hospital, Paddington—the same hospital in which Prince William and his brother, Prince Harry was born to Diana, Princess of Wales, in 1982 and 1984, respectively.  The Queen’s former gynecologist, Marcus Setchell, delivered the baby assisted by Guy Thorpe-Beeston, Sunit Godambe and Physician to the Queen John Cunningham.

“The Duke of Cambridge was present for the birth,” the statement added. “The Queen, The Duke of Edinburgh, The Prince of Wales, The Duchess of Cornwall, Prince Harry and members of both families has been informed and are delighted with the news.”
Mother and son are both doing well, the palace said, and will remain in the hospital overnight.

“We could not be happier,” Prince William said via a palace spokesperson. He will be spending the night at the hospital with his wife and new baby. A palace source tells CBS News that William was with the duchess throughout her labor, and called the queen, Prince Charles, Prince Harry and the Middleton’s with the news. In a statement, Charles said he and wife Camilla, Duchess of Cornwall, are “overjoyed” by the baby’s birth.

“Grandparenthood is a unique moment in anyone’s life, as countless kind people have told me in recent months, so I am enormously proud and happy to be a grandfather for the first time and we are eagerly looking forward to seeing the baby in the near future,” he gushed.

A bulletin containing details of the birth was taken by car to Buckingham Palace and placed on an easel at the palace gates for the public to see. Initially, officials had planned to place the bulletin on the easel before issuing the news electronically, but changed course shortly before the birth was announced.  Prince George of Cambridge (George Alexander Louis) is the only child of Prince William, Duke of Cambridge, and Catherine, Duchess of Cambridge. The only grandchild of Charles, Prince of Wales, and Diana, Princess of Wales, he is third in line to succeed his great-grandmother, Queen Elizabeth II, after his grandfather and father. 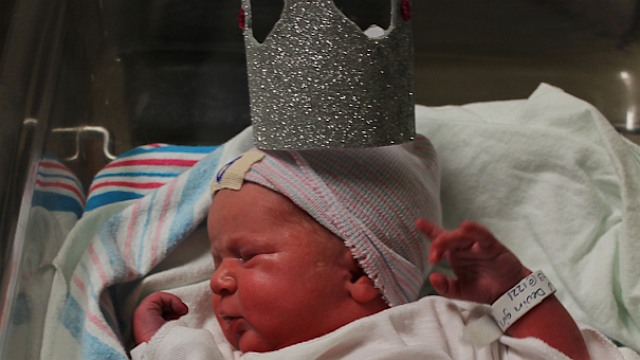 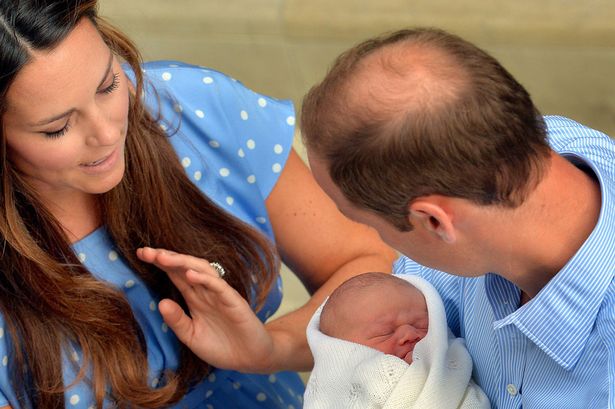 The customary formal bulletin announcing the royal birth was displayed on an easel outside Buckingham Palace, although in a break with tradition the news was first conveyed in a press release from Palace officials. Gun salutes signals the birth in Bermuda, in London, in New Zealand, and in Canada; the bells of Westminster Abbey and many other churches were rung; and iconic landmarks in the Commonwealth realms were illuminated in various colors, mostly blue to signify the birth of a boy.  Before the birth there was speculation that it would boost the national economy and provide a focus for national pride.

Plenty of excitement has surrounded the royal birth. In the days leading up to the big day, reporters and photographers from the four corners of the globe clamored for pictures of the couple . The Royal Mint has minted 2,013 silver coins bearing a shield of the Royal Arms, to be given to newborns who share their birthday with the third in line to the British throne. Souvenirs and commemorative memorabilia are expected to flood Britain’s stores.