She’s like something that stepped out of the sweetest dream. The petite seductress known as “Dream” first appeared in our 1st Annual Swimsuit Issue and was an instant hit.  Despite the exotic tattoos that decorate her heavenly curves, the Black and Native American beauty is more than seduction and illusion. Delve further into her dream world and see what the buzz is all about. We promise not to wake you!

SB: How does it feel to be returning for a second appearance in Stunner Baby Magazine?
DREAM: “Its feels awesome to have a place were I can continually get accepted to be published with such a great magazine.” 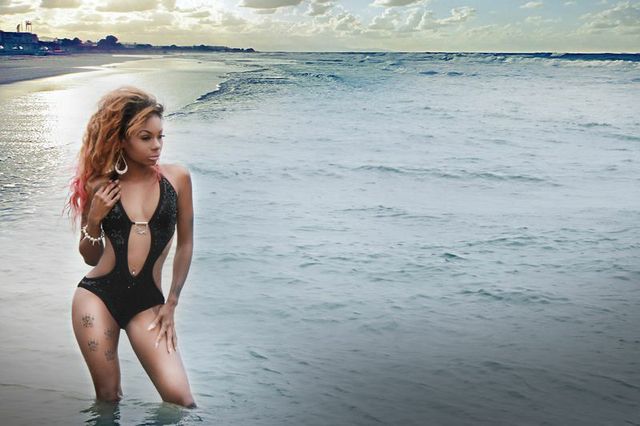 SB: What is the meaning of your tattoos? Who were the artists?
DREAM: “My kiss print on my foot is just a reminder to my haters were there’re lips need to go. My paw prints on my thigh means nothing. My cherry n strawberry on my hip I was a Jr in high school drawing and thought it was pretty cute so I tatted it. My lower back tattoo is my second tat and regrets it. People do not tattoo your name. I have the Aquarius waves with a star behind it on my hand. On my wrist says Mrs. Jarri and jarri is my middle name. Under my left arm is in god I trust. On my right arm is a broken heart with a clock come out saying in time ill heal which is just a saying and no nobody broke my heart. On my left side I have “you never know how strong you are until being strong is your only option”. I got Atlanta skyline on one shoulder and Chicago skyline between “Dakota Sioux” which is my Native American tribe. Behind my ear I have a bass and treble clef. I love listening to music from young jeezy t.I to 3 doors down swv and Lenny Williams to Brittany spears and spice girls. Lastly, I have a bow on the back of my thighs that I refuse to get finish because it hurt so badly.”

SB: What are some of your modeling accomplishments?
DREAM: “I’ve appeared in the 1st Annual Stunner Baby Magazine Swimwear Issue 2012. Also, I’ve appeared in a video with Soulja Boy and Gucci Mane “Gucci Bandana.”

FOR MORE OF THE SEDUCTIVE DREAM, VISIT