Posted by stunner3baby | On October 04, 2013 | Leave a comment | Under: Claude Julian, Columnists, Featured, Features, Letter From The Editor

In the many years that I have lived in the Chicago area never have Black on Black crime reach such epic proportion. What in the hell would motivate any young black person to shoot to kill? Our communities are shackled in a web of fear, despair, poverty, and sheer ignorance. 90% of the murders in Chicago are Black on Black gangs killing each other. More people killed in Chicago (419) than U.S. soldiers in Afghanistan (259.) Today there are 100,000 gang members vs. 12,000 cops in Chicago. Gang members were responsible for 61 percent of all homicides in 2011, up from 58.7% in 2010.

The July 4th weekend gun violence pushed the number of Chicago murder victims this year over 200. Many of his shootings were in neighborhoods where gangs are well established. Chicago reached a tragic milestone surpassing 200 homicides for the year, with 74 people shot between Wednesday afternoon and Sunday night.

Two of the victims were young boys, aged 5 and 7, according to the Chicago Police Department. Chicago Tribune data shows they were among the 12 people killed by gun violence over the four-day period. Chicago has recently suffered from spikes in gun violence originating from hundreds of gang factions established in block-by-block territories on the South and West sides of the city. According to police data, 40 percent of the gun violence over the weekend took place in just two neighborhoods in those areas – Austin to the west, and Garfield Park to the south.

The increase in gun violence since last year, when fatalities surpassed 500 deaths, prompted the police department to incorporate new strategies for targeting specific individuals, or locations, in an effort to prevent violence before it takes place. Police officials have also endorsed using social media to track “hot” activity among gang members, plus have cracked down on corner liquor or grocery marts, which they say have become conduits for crime.

A criminal event that sends shock waves nationally when, thirteen people were shot on (Thursday, September 19, 2013) night in a park on Chicago’s South Side, the Chicago Tribune reported. The shootings reportedly occurred at a basketball court in Cornell Square Park in the city’s Back of the Yards neighborhood.

A 3-year-old boy (Deonta Howard) who was among 13 people wounded in a late-night attack on a southwest Chicago park was alert when he arrived at the hospital and was apparently doing well, his family and friends said early Friday. The child’s uncle, Julian Harris, told the Chicago Sun-Times that dreadlocked men in a gray sedan shot at him before turning toward nearby Cornell Square Park and opening fire. He said his nephew was shot in the cheek.

“They hit the light pole next to me, but I ducked down and ran into the house,” Harris said. “They’ve been coming round here looking for people to shoot every night, just gang-banging stuff. It’s what they do.”

Police arrested four men in connection with a Chicago shooting that wounded 13 people, including a 3-year-old boy, authorities said Tuesday, September 24, 2013. Two of the four suspects — Tabari Young, 22, and Bryon Champ, 21 — fired shots in the incident, Chicago police said. All four have been charged with attempted murder and aggravated battery with a firearm, police said. Young is accused of firing an assault-style rifle used in the shooting. Police say Champ also fired a gun during the incident. A third suspect, Kewane Gatewood, 20, is accused of supplying the assault weapon, and Brad Jeff, 22, was allegedly the lookout during the shooting, police said.

“Our officers and our detectives have worked tirelessly in partnership with the community, to solve this case and hold the criminals who committed this senseless act of violence responsible for their actions,” Chicago Police Superintendent Garry F. McCarthy said in a statement. In all, 13 people were shot Thursday at the Back of the Yards neighborhood on Chicago’s South Side. The shooting victims included 3-year-old Deonta Howard and two 15-year-olds. All the victims survived. Deonta’s grandmother made a plea to those fueling violence in Chicago. 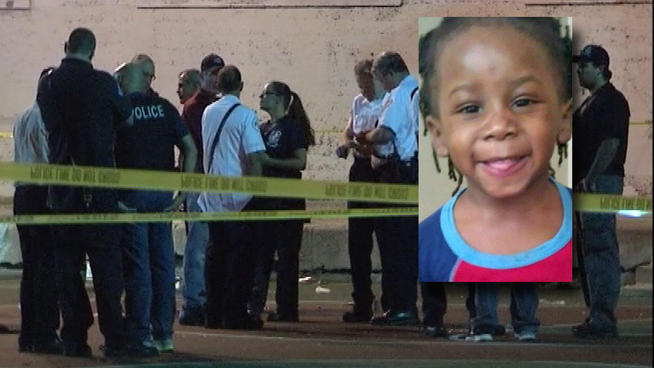 “Y’all out here killing these innocent people, kids, parents, grandparents, mothers, and fathers: It’s got to stop. You need to stop,” Semehca Nunn said. An assault-style rifle with a high-capacity magazine was used in the shooting, which appears to be gang-related, McCarthy has said. One of the alleged shooters, Champ, is a documented gang member, police said. Chicago bans some semiautomatic weapons and high-capacity magazines and restricts handguns.

The FBI’s annual crime report last week showed Chicago had 500 homicides in 2012, up from 431 in 2011 and more than any other American city. Chicago officials have said homicides this year are below the 2012 pace. Still, Chicago does not have the highest homicide rate in the United States. That distinction belongs to Flint, Michigan, with one homicide for every 1,613 residents, according to the FBI data. Detroit is close behind, with one killing for every 1,832 residents. In 2012, the number of violent crimes increased by 0.7% compared with the previous year, according to the FBI figures.

What’s next the National Guards? This would be an incredible out of the box thinking that needs forceful and impactful actions. What is the difference between a gang member and a terrorist?