Letter From The Editor: University of Virginia Police Brutality

Posted by stunner3baby | On April 01, 2015 | Leave a comment | Under: Claude Julian, Columnists, Features, Letter From The Editor

Stunner Baby Magazine is all over the increasing violence inflicted on Black males by some lawless police officers across America. The latest incident of sheer brutal violence occurred at the University of Virginia as junior Martese Johnson was beaten by state Virginia Beverage Control agents while celebrating St. Patrick’s Day. Johnson was approached by an employee of Trinity Irish Pub asking him for his license. The employee quizzed Johnson about his zip code, and Johnson provided his mother’s current zip code. The number is different from the one listed on his current Illinois license. At that point, Virginia ABC agents questioned Johnson about being in possession of false identification. Johnson is originally from Chicago, where his mother still lives. He was never in possession of a fake ID.

The Virginia ABC agents without warning forced him brutally to the ground where they handcuffed him while “his face and eye were bleeding and in need of surgery.”  Johnson received a giant gash on his head requiring ten stitches. 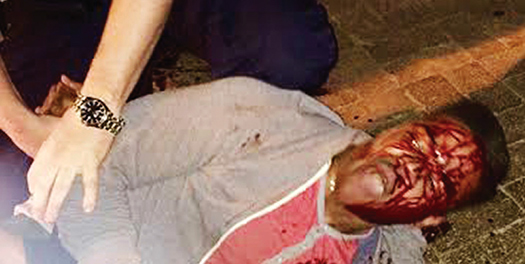 “I go to UVA, you f-king racist,” the 20 year old Johnson, who is black, shouted at a white officer during an exchange captured on video in the hours after Saint Patrick’s Day “How did this happen?” This ordeal doesn’t begin to justify the bloodied faced student’s image that has been circulating the web.  The picture garnered the attention of activists, celebrities, and other college communities that took to Twitter to denounce police brutality.

Following the incident the University of Virginia’s Concerned Black Student Alliance, in which Johnson is the leadership development chair of the organization, penned a letter stating: “Today, we are reminded of the gruesome reality that we are not immune to injustice; as University students, we are not impervious to the brutality that has reeled on news cycles around the country,” the students wrote. “After Martese was denied access to the bar a beat down ensued. The brutish force used resulted in his head and bodily injuries. His treatment was unprovoked as he did not resist questioning or arrest. In confusion, with blood painting his face and creating a pool on the bricks of the corner, he yelled out for mercy. Though he lay bleeding him down, twisting is arm, with knees to his back until he was handcuffed.”

Johnson’s lawyer spoke out about his beat down at a news conference about his arrest at the University of Virginia, which resulted in him being badly beaten. Martese was “shocked that his face was slammed into the brick pavement three blocks from where he attends school.”

“I trust that the scars on my face and head will heal but the trauma from what the ABC officers did will stay with me forever.” 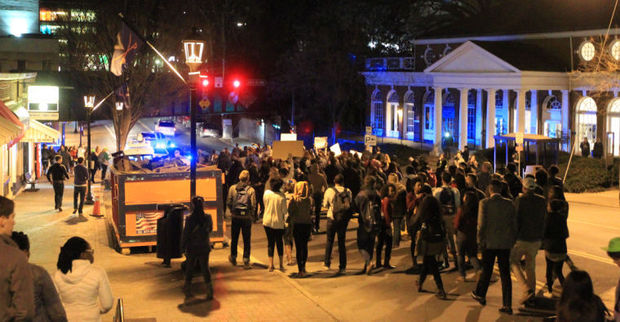 Despite that plea in the heat of the moment, Johnson’s roommate told MTV News on (March 20) that he and Martese were not shocked that an incident kike this could occur at their school.

“We were not surprised that it happened at all, because we’ve seen incidents like this happen before,” said Josh Kinlaw, who has lived with Johnson since August 2014. “[We] witness it almost every day — not anything to this magnitude every day, but we witness acts of racism — both systematically and blatant, in-your-face acts — every day.  And so our surprise was not that it happened, our surprise was that it happened to Martese, because of the type of person that we know him to be and the outstanding leader and figurehead that he is within the community.”  Kinlaw, a junior, feels that racism at UVA can be subtle sometimes but is certainly pervasive.

“One of the things that we talked about in one of our meetings was how Greek life continues the cycle of racism that persists among our community, because of the fact that it creates an exclusive environment, which tends to exclude minorities,” Kinlaw explained, when asked about conversations he, Johnson and other black students had after the deaths of young black men like Michael Brown and Tamir Rice, who were fatally shot by police officers

“And because Greek life is such a big part of the social life here on the campus, that only perpetuates that racist, cultural lease that exists.”

Now Kinlaw and others are hoping some real dialogue will spark a larger reform movement, beyond their own campus.

“We just want people to know these are not isolated incidents that are occurring across the nation,” he said, adding that “the black student body and all those in support of us.” were constructing a list of grievances and tangible changes to present to the administration in the coming days.

“These incidents are related because of the history that this country holds, the very principles that this country and institution were founded upon were those which held us in a light of racism and in very inhumane light, we were treated like animals,” he added. “Because that history is not very far removed — we’re less than 50 years removed from the Civil Rights Movement — it’s important that we allow people to see that history lives.”