Gravity is an amazing genius of cinematic special effects filmmaking as all hell breaks loose 372 miles above earth. The film stars Sandra Bullock (Dr. Ryan Stone) and George Clooney (Matt Kowalski) as surviving astronauts from a damaged Space Shuttle mission, as they attempt to return to Earth. Dr. Ryan Stone is a Mission Specialist on her first space shuttle mission aboard the Space Shuttle Explorer. She is accompanied by veteran astronaut Matt Kowalski, who is commanding his final expedition. Kowalski, who is wearing a thruster pack, flies around the space shuttle testing its operation.

However, during their final spacewalk to service the Hubble Space Telescope, Mission Control in Houston warns the team that debris from a Russian missile strike on a defunct satellite has caused a chain reaction of destruction and that they must abort the mission. Shortly afterward, communications with Mission Control are lost, though Stone and Kowalski continue to transmit in hope that the ground crew can still hear them.  High-speed debris impacts the Explorer and detaches Stone from the shuttle, leaving her tumbling through space. Kowalski soon recovers Stone and the two uses the thruster pack to make their way back to Explorer. They discover the shuttle has been damaged far beyond usability and the rest of the crew is dead. They use the thruster pack to make their way to the International Space Station (ISS), which is in orbit only about 2,950 feet) away. Kowalski estimates they have 90 minutes before the debris field completes an orbit and threatens them again.

En route to the ISS, the two discuss Stone’s life back home and the death of her young daughter in a schoolyard accident. As they approach the slightly damaged ISS, they see that its crew has evacuated in one of the Soyuz modules and that the parachute from the other capsule has been accidentally deployed, rendering it useless for return to Earth. However, Kowalski suggests that the remaining Soyuz, designated TMA-14M, can still be used to travel to the nearby Chinese space station Tiangong to retrieve another module that can take them to Earth. Out of air and maneuvering power, the two try to grab onto the ISS as they fly by. At the last moment, Stone’s leg becomes entangled in the Soyuz’s parachute cords, but Kowalski realizes that his momentum will carry them both away; over Stone’s protests, he detaches himself from the tether so that Stone might survive, and the tension in the cords pulls her back towards the ISS. As Kowalski floats away, he radios additional instructions and encouragement to Stone. 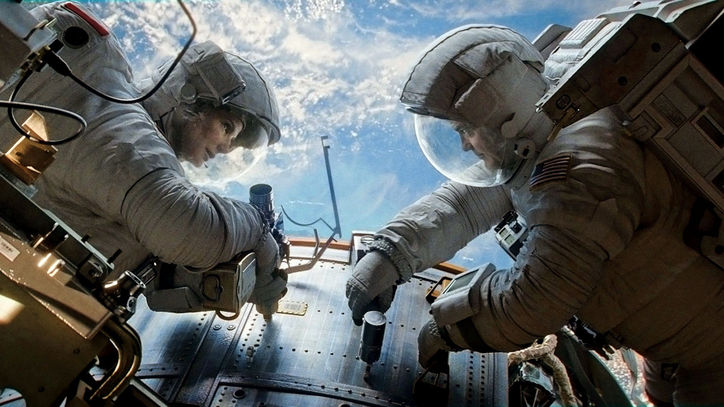 Stone enters the ISS via an airlock but must hastily make her way to the Soyuz to escape a fire. As she maneuvers the capsule away from the ISS, the tangled parachute tethers prevent Soyuz from separating from the station. Bullock spacewalks outside to barely release cables just as the debris field completes its orbit and destroys the station.  Gravity opened at the 70th Venice International Film Festival in August 2013. Its North American premiere was three days later at the Telluride Film Festival. It received a wide release in the United States and Canada on October 4, 2013. Reactions from critics and audiences alike have been overwhelmingly positive, both sides giving much praise for Emmanuel Lubezki’s cinematography, as well as Bullock and Clooney’s performances.

Unable to dock the Soyuz with the station, Stone ejects herself via explosive decompression and uses a fire extinguisher as a makeshift thruster to travel to Tiangong. Space debris has knocked the Chinese station from its orbital trajectory, and it is rapidly de-orbiting. Stone enters the Shenzhou capsule just as Tiangong starts to break up on the upper edge of the atmosphere. As the capsule re-enters the Earth’s atmosphere, Stone hears Mission Control over the radio tracking the capsule. It lands in a lake, but an electrical fire inside the capsule forces Stone to evacuate immediately.

A big challenge for the team was the question of how to shoot long takes in a zero-g environment. Eventually the team decided to use computer-generated imagery for the spacewalk scenes, and automotive robots to move Bullock’s character for interior space station scenes. This meant that shots and blocking had to be planned well in advance in order for the robots to be programmed.

Most of Bullock’s shots were done with her inside of a giant mechanical rig. Getting into the rig took a significant amount of time, so Bullock opted to stay in it for up to 10 hours a day, communicating with others only through a headset. Director, Alfonso Cuaron said his biggest challenge was to make set feel as inviting and non-claustrophobic as possible. The team attempted to do this by having a massive celebration when Bullock arrived each day.

Preliminary reports had the film tracking for a debut of over $40 million in North America. The film earned $1.4 million from its opening night showings, and reached a $17.5 million in by Friday’s total. It went on to break Paranormal Activity 3’s record as the biggest October and autumn openings ever, as the film brought in $55.8 million. Of the film’s opening weekend gross, 80 percent of the total was derived from its 3D showings for a sum of $44 million—which also includes $11.2 million, or 20 percent of the total receipts, from IMAX 3D showings, the highest percentage ever for a film opening more than $50 million. As of October 19, 2013, Gravity has grossed $148,606,000 in North America, and $68,000,000 in other countries, for a worldwide total of $216,606,000.