One of the most chagrin accounts of kidnapping in American history, shocked and horrified Cleveland, Ohio. On May 6, 2013, three Cleveland women (Amanda Berry, Georgina “Gina” Dejesus, and Michelle Knight) were rescued from captivity in a house owned by Ariel Castro. Castro’s home at 2207 Seymour Avenue, in Cleveland’s residential Tremont neighborhood, police reported was 3 miles from where the three women had disappeared.  According to police, when Castro left the house that day, Berry realized that he left the home’s “big inside door” unlocked. This was now her opportunity for her possible freedom. Gripped with fear, Berry did not attempt to break through the outer door because “she thought [Castro] was testing her”, according to the police report, so instead she screamed for help.
Neighbor Angel Cordero responded to the screaming but was unable to communicate with Berry because he spoke little English. Another neighbor, Charles Ramsey,  joined Cordero at the house’s front door at some point during the rescue. A hole was kicked through the bottom of the storm door, and Berry crawled to freedom, carrying her daughter.   Cordero claimed to have kicked in the door alone, while Ramsey claimed it was a joint effort. According to Ramsey, Berry was wearing a jumpsuit, a white tank top, rings, and mascara; he said she “didn’t look like she was kidnapped.” Upon being freed, she hurried to the house of another Spanish-speaking neighbor and called 9-1-1, saying, “Help me, I’m Amanda Berry … I’ve been kidnapped, and I’ve been missing for 10 years. And I’m here; I’m Free now.” 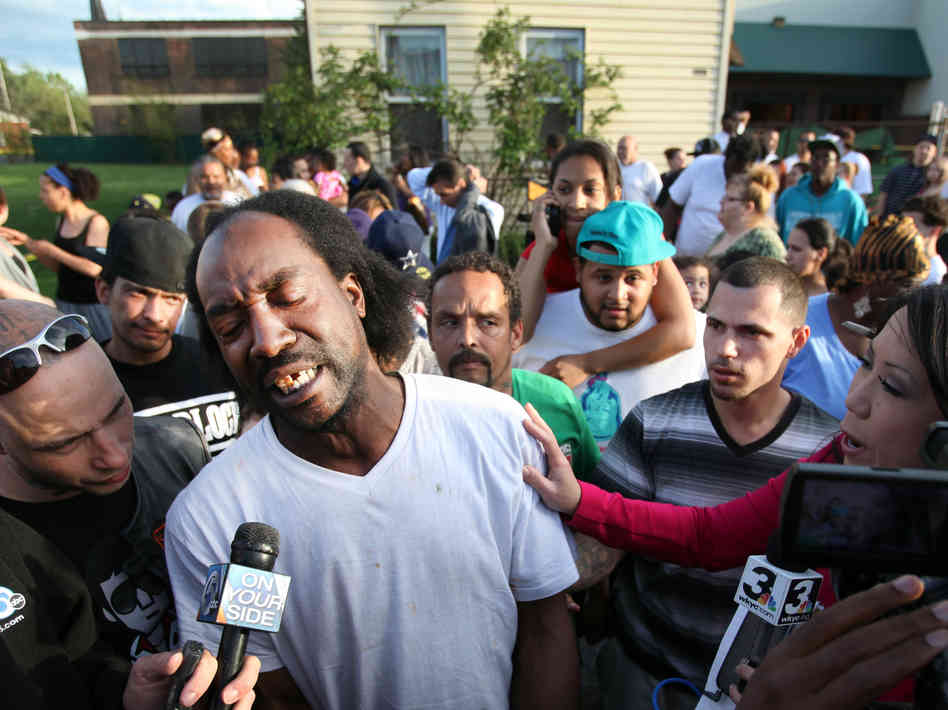 According to a statement from Cleveland police, officers had visited Castro’s home only once following the kidnappings to discuss an unrelated incident. Castro did not appear to be home at the time and was later interviewed elsewhere. Although neighbors claim to have called the police about suspicious activity observed at the home, police say they have no record of any such calls.   Castro was arrested on May 6, 2013 and charged on May 8 with four counts of kidnapping and three counts of rape. Two of his brothers were also initially taken into custody but were released on May 9 after police announced they had no involvement in the kidnapping. On May 9, Castro made his first court appearance in Cleveland Municipal Court, where bail was set at $2 million per kidnapping charge, for a total of $8 million.

A DNA test confirmed that Castro fathered Berry’s 6-year-old daughter. Knight told police that Castro had impregnated her at least five times and had induced miscarriages each time through beatings and starvation. Dejesus told law enforcement she was raped but did not believe she was ever impregnated. Castro’s DNA will also be compared to unknown DNA from other crimes.

How in the world did these three innocent women become victims of kidnapping by the evil Castro?  Let’s go back to the beginning of all three kidnapping scenarios:

FOR MORE ABOUT THE CLEVELAND KIDNAPPING, VIEW OUR MAY/JUNE 2013 SUMMER HEAT ISSUE