» Columnists » Stunnerbaby World: The Haves and Have Nots

Stunnerbaby World: The Haves and Have Nots

“The Have and the Have Nots” fifth episode of season 2 averaged 3.35 million viewers in the 9 o’clock hour, according to Nielsen, up a big 21% week to week and double the audience of the show’s series opener last May (1.77 million). It also grew by 15% in adults 18-49 rating (1.13 from 0.98), and by 16% in women 25-54 (1.87 from 1.61), its strongest showing. “Haves and the Have Nots, ” an in-your-face drama about the powerful Cryer family and the hired help who work in their Savannah, Ga., mansion, beat out all cable programs on Tuesday in total viewers — besting the likes of Fox News Channel’s “The O’Reilly Factor” (3.08 million) and Discovery reality show “Moonshiners” (3.03 million). In adults 18-49, its 1.13 rating put it just slightly behind “Moonshiners” (1.15) as the No. 1 cable original in its time period. It also finished ahead of ABC’s 9:30 p.m. comedy “Trophy Wife” (0.9 rating). Among all OWN programming since its January 2011 debut, only a March 2012 “Oprah’s Next Chapter” interview with Bobbi Kristina has drawn more viewers (3.5 million) than Tuesday’s episode of “The Have and the Have Nots”. Let’s dive into a brilliant multi-racial cast of “The Have and the Have Nots.”

The Haves (The Cryer Family)
James “Jim” Cryer (John Schneider) is the patriarch of the Cryer family and a powerful Savannah criminal courts judge, who has his eyes set on running for Governor of Georgia. Jim is a philandering, two-timing, and licentious husband. He and his wife, Katheryn, aren’t close anymore because of this. However, they present themselves to the public as having a strong and loving marriage.

Katheryn Cryer (Renee Lawless) is Jim’s very intuitive, pessimistic, malcontent, and furtive housewife and the mother of Wyatt and Amanda. An heiress, Katheryn was born into a very wealthy and influential family (her father was also revealed to be an alcoholic during an argument with Jim). She always has some idea of what’s going on without things being directly revealed to her, especially with regards to her close friends and family.

Wyatt Cryer (Aaron O’Connell) is the son of Jim and Katheryn. In the first episode, it’s learned that Wyatt is so incorrigible in his vices that he’s on his third stint in rehab for drug abuse and alcoholism. Wyatt’s current rehabilitation program is run by the Harrington family and is on an outpatient basis on the condition that he is monitored on a 24/7 by Jeffrey Harrington. Very hostile and ill-natured about this arrangement, Wyatt is constantly copping attitude and making snippy remarks, even in moments in which his redeeming sides are shown.

Amanda Cryer (Jaclyn Betham) is Jim and Katheryn’s naïve college-aged daughter who is friends with her father’s mistress, Candace. To date, Amanda is unaware that Candace was (and possibly still is) her father’s mistress. Amanda has had issues with self-harm and suicide in the past, having engaged in cutting herself. It has been hinted in the series that the reasons for Amanda’s battles with self-harm may stem from some traumatic sex abuse incident from her distant past, involving Wyatt and a priest.

The Harrington Family
Veronica Harrington (Angela Robinson) is the very classy and dashing but haughty and catty friend of Katheryn, wife of David, and mother of Jeffrey. Very outspoken, she manifests a striking, forceful, and stinging delivery that is also smooth, fluent, and refined. One to firmly impose her will and accomplish the goals she sets out for herself, Veronica is also represented as stern and determined. Veronica has proven herself a success story who has lived a rags to riches life: she started out in poor, struggling circumstances, living from the dangerous projects, which speaks to her self-proclaimed “tough hood” side; however, through hard work and determination, she has fought her way up into luxury and the elite.

David Harrington (Peter Parros) is the grim, gravelly-voiced husband of Veronica and father of Jeffrey. He is a judge and is also Jim Cryer’s business partner and friend. He spends most of his time trying to clean up Jim’s messes and cover up for his (Jim’s) extramarital affairs as his career path is currently aligned with Jim’s. As a result of trying to clean up Jim’s messes at every other turn, David has gotten himself into serious plights and predicaments of his own. Most notably, in an effort to frame Candace to avenge Jim, David unintentionally ended up framing Candace’s brother and Hanna’s son, Benny.

Jeffrey Harrington (Gavin Houston) is David and Veronica’s son. Jeffrey is Wyatt’s 24/7 substance abuse counselor in the Harrington family’s drug rehab program. Much to Wyatt’s displeasure, Jeffrey’s counseling is full of preachy remarks and frequent urgings for Wyatt to open up about his feelings. A topical matter in the series has been Jeffrey’s sexual orientation. Closeted throughout much of the first season, Jeffrey spends most of his time immersed in his job of monitoring Wyatt. Although the two grew up with each other, Jeffrey finds that the more time he spends with Wyatt, the more he seemed to develop feelings for him.

The Have Nots (The Young Family & Celine):
Candace (Tika Sumpter) is Hanna’s estranged daughter, Benny’s sister, and Jim’s latest mistress who’s less than half his age. Candace is portrayed as a roguish, crafty jezebel with a saucy attitude. Often, Candace subjugates others through her many forms of manipulation; coercion; low blows; and dirt she’s able to obtain on people. Unprincipled and unscrupulous, Candace has pulled many cons; has acted as a prostitute and a mistress; has engaged in elaborate forms of blackmail. Candace also has redeeming qualities about her however, such as her genuine love and concern for her brother, Benny, and friend Amanda. In addition, she is very gay-friendly and has assisted Jeffrey through his struggles in dealing with his mother’s anti-gay behaviors. She has expressed a discontentment with growing up with nothing and the dysfunctional family life she feels was brought on by her mother’s bad choices and sexual immoralities. Candace is covetous and aspiring of the wealth and riches that the Cryer family possesses. She will go to any and all lengths to partake in it. Most of Candace’s ill-gotten gains have been procured through illicit sex acts and other illegal and reprehensible activities.

Hanna Young (Crystal Fox) is Benny and Candace’s mother and the Cryer’s maid. She raised her two children as a single mother. Hanna is very soulful, religious, grandmotherly, persevering and compassionate. Haggard and long-suffering, she often displays the effects of overwhelming stress, overwork, and worry in her behavior. Still and all, she is very much a trouper who’s uncomplaining, faith-driven, and always hard-working. Compounded with this, Hanna is also trustworthy and reliable and can be confided in about anything. This has won her the respect of her superiors and even a close bond with her boss Katheryn. Hanna is often confronted with many hardships and obstacles, but she has used her strong faith in God to pull through. Hanna has an unprincipled distant past with regards to her sexual behavior. For example, she knowingly had sex with a married man to give birth to Benny and with a one night stand to give birth to Candace.

Benjamin Young (Tyler Lepley) is Hanna’s son and Candace’s brother. He operates a tow truck company. In comparison to his conniving sister, he is less prone to cause trouble for his mother. Benny is personable, well-mannered, and hard-working. He’s tough in areas of his demeanor and shows strong love and caring for his family. Benny’s often caught in the middle of his mother’s and Candace’s testy relationship with each other. Despite the fact that his mother has completely given up on Candace, Benny still shows he loves and believes in Candace. Secretly behind his mother’s back, Benny has close ties to Candace and keeps in contact with her.

Celine Gonzales (Eva Tamargo) is another maid in the Cryer home and ex-friend to Hanna Young. Celine was originally depicted as a very down-to-earth, well-informed (and sometimes gossipy) woman who would oftentimes divulge useful inside information to Hanna. However, as time moved on and Hanna appeared to become closer to Katheryn Cryer and gain favor within the Cryer household, Celine’s demeanor changed and she began to take on a more jealous, sarcastic and antagonistic attitude towards Hanna. 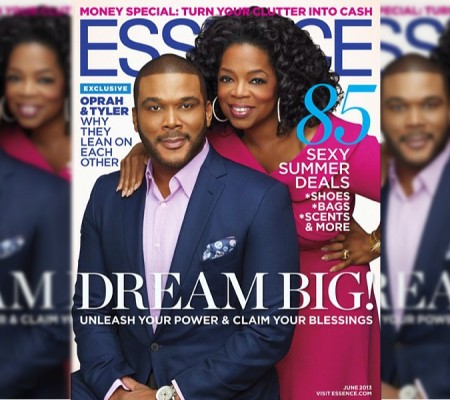 Oprah and Tyler Perry on the cover of Essence

THE HAVES AND HAVE NOTS GALLERY

FOR MORE ON THE BUZZWORTHY “THE HAVES AND HAVE NOTS”, VISIT
http://www.oprah.com/app/the-haves-and-the-have-nots.html